What To Plant. What Will Grow.

Over the last few weeks I have been thinking about what I will be growing over the warmer months.  The 4 year old grandaughter wanted to help so, with help from her mum, she brought out some seeds and some seed trays so she could "plant seeds with Nanny" and a couple of weeks ago when L, T and J were out here they made a start.  They filled and planted the 3 trays, they filled some jiffy pot things for daughter L to take home and they got me motivated to keep planting over the next week. 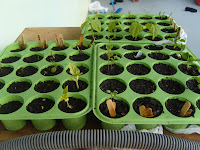 The seed trays were put on a table and left on the front verandah.  I found an old spray bottle with the idea of giving them a spray when needed but after a couple of days I put each tray into a plastic shopping bag and tied it shut.  Within a few days the seeds were up with no extra mucking around from me and I removed them from the bags.  I now give them a squirt with the hose every couple of days but some of them need to be put out in the ground.  A job for this week.

Going through all my seeds I just pick out things that can be planted now, I never have a plan as such, I just plant what I have and hope enough grows so I don't have to buy anything.  So far that has worked but really, I don't try and do anything too hard.  Apart from the bleedin' carrots.  I'm a pretty SlackA*** gardener and if something doesn't grow I just try again or plant something else. 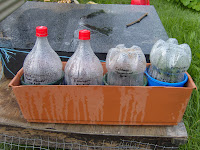 I've also put other seeds into the bottom half of coke bottles with the lid as a top and more seeds in jiffy pots in a cardboard box with a sheet of glass over it.  One bottle has Rosemary cuttings.

More seeds in this container.  Hubby bought a salad roll while away at work one day and I rescued this from the bin.  He will growl but hey, if it works it will be worth it. 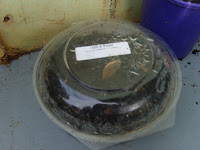 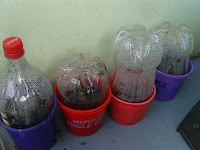 These bottle have cuttings in them.  After a month the Mulberry cuttings are starting to bud up but the Bougainvillea look like they are dead which is a shame as they have come from Doolgunna Station and were a really nice colour but I wanted them as a remembrance thing.


I am trying again with Carrots but not going to hold my breath.  I hardly ever get these up and growing.  I think I have managed to get 2 lots good enough to eat but have had 5 or 6 attempts.  I have read that they need to be kept moist, so they are covered with newspaper.  That will be removed if when the carrots come up..  If When they come up then they should make it to a decent size so here's hoping.

I have put peas in this end as well and it shouldn't be long before they are up.  I put bottles over them as a bit of an experiment.  Any other time that I plant peas I don't worry about covering them but I am hoping this will get them up quicker.

I'm not sure what the girls planted though we did write it on sticks and shoved it in with the seeds.
I should probably write it all down so I know but I'm not too fussed.  I'll know soon enough when they start producing!
I think I've made a decent start but come September I will need to get a lot more stuff in.
Posted by Barb. at 1:36 PM

Labels: In The Garden. Challenges.