A work in progress...
Way back in October 2009 I bought 2 dozen fertile eggs so that I could start a flock of my own.  They were  supposed to be the eggs of pure Black Australorps.
I bought them from a woman in Gelorup, WA.
They were not pure Australorps at all.  It turns out that she had a Plymouth Rock rooster in with the Australorps for a time but she did not bother telling me this.

We put them in L's incubator with a pile of eggs from her chooks.  She had a great success rate, we had 7 eggs hatch.  Seven from 24.  Not good.  One chicken died.  I cried.

We broke open the unhatched eggs and 13 were not fertile, 3 had not matured and 1 we couldn't tell.
The 6 little surviving chickens were so cute and I brought them home and put them in a broody box in the bathroom 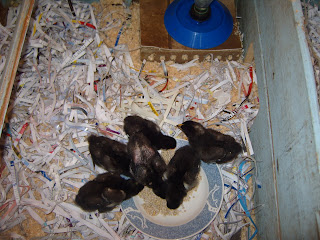 After a bit we could tell that 2 were different.  Maybe roosters...They got bigger and were definitely different.  maybe a different breed altogether? 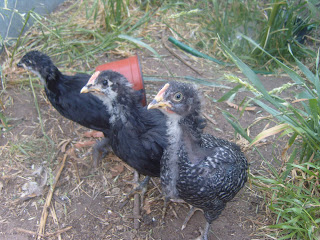 I emailed the woman and she assured me that they were Australorps and told me that if I didn't know what they were supposed to look like then I should check the breed standards.  I checked, they did not match any description of an Australorp.
I sent her photos and again asked for a refund.   She again refused to refund me any money
Eventually she admitted that she had had a Plymouth Rock rooster in with her Australorps and offered to exchange the PR birds only if they were hens, she wouldn't exchange any roosters.  Not even if they were the wrong breed!!
We are not at all impressed with the tactics of this breeder person. 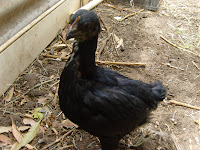 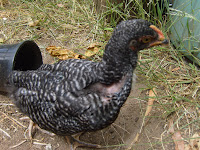 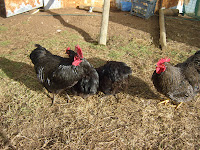 
They were hand-raised by me, they grew up and I loved them.

They started laying eggs and I put some under a Mixed Breed hen that had gone clucky. 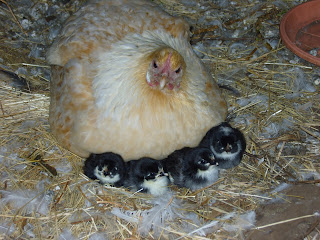 Were they Australorps?  Plymouth Rocks?
They are my AussieRocks.

2011
I now have a Plymouth Rock looking rooster who thinks he is King and sometimes needs reminding that he shouldn't get toey with me.  I don't trust him though and that's not good.  He still has 3 black hens and 1 PR coloured hen in with him.  The black rooster was found dead early this year.
I am hoping that they will go clucky and raise their own chickens but I don't know if they will or not.   I will keep putting any eggs from them under a Mixed Breed clucky whenever I can.

The offspring from the 6 chickens are kept in a separate pen and we cull and eat the roosters.  The hens seem to take a long time before they start laying. 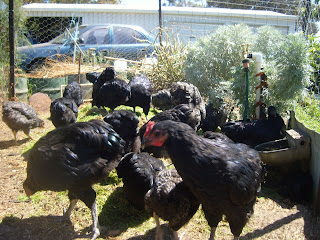 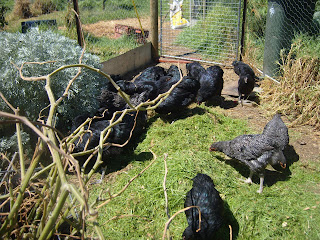 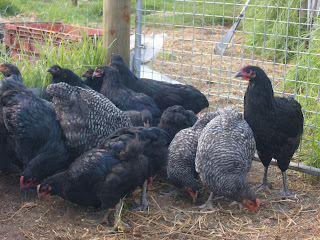 Sometime after August 2011 the PR rooster started sounding *funny* when he crowed.  I eventually noticed that it wasn't him, it was the other PR coloured bird.  Was the PR hen a rooster?  She/It had always been a big bird and it is now bigger than Rocky (the PR rooster) and has the big comb and wattle.  I have not seen it mount any of the hens but I am not out there all the time so of course it may have done. I *think* it's a rooster though.  Can females become male.  I don't think so so it looks like it was just a late maturer.

Dec 14th 2011.
I've noticed for a while now some of the legs looking a bit scaley.  This morning the breeders were given some potion from the vet.  It is supposed to get rid of all internal and external bugs.  Their legs were also oiled.

We also did the pen of AussieRocks.  I have been oiling their legs for the last few weeks but this way I can be sure that they will get better.

December 14, 2011.
I have taken out the small black hen that has been in the rooster pen.  She was always bare backed and so she has been put in the big pen with the AR's.

July 2012.  Rocky has been culled.  I could relax when in his pen so it wasn't being cleaned as often as it should have been.   I will keep a black rooster to replace him.