We have had a few wet days.  Very wet.  Husbands boots are wet, my boots were wet.  I put them in front of the fire to dry out then gave them a clean and rubbed them over with shoe polish.  The next day I wore them and they are wet again.  What I needed was a protective coating, a beeswax coating but I have tried to rub straight beeswax on boots before and it was all too hard.  haha  See what I did there?!

I needed something to mix with the beeswax to keep it soft and rubinable so onto Google to see what others had to say about it all.

I found a recipe for boot polish, it looked simple and even though it was early and cold I decided to give it a go.    Recipe said I needed beeswax.  Yep, got that.  And Olive oil.  Ummm, no.  No oil.  But wait!  Yes I do have oil.  I had the remains of the 20 litres of old cooking oil that we collected from the café for treating Scaley leg mites on the chooks.  Too manky too use?  Not around here!

And because it has been so cold the inside fire was burning.  Bonus. 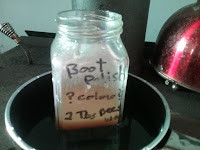 I used the axe to chop a chunk of beeswax off the lump I had outside.  Chopped it smaller as I only needed 2 tablespoons of the wax.  Took a 1/2 cup measure and put water in the jar and marked it so I knew how much oil I needed.  Outside to the chookpen and poured in the oil, back inside and put the jar of wax and oil into a pot of water on the stove.

Waited until the wax had melted, took pot off of the stove and put it onto the sink.  Outside to let the chooks out and feed the sheep.  Back inside only to find that the wax had hardened in the jar and was unpourable and the jar was too deep to get the wax out.  Clever...not. 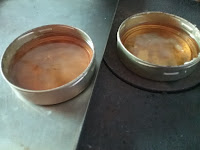 Put the pot and jar back on the stove to remelt the wax mixture, this time staying inside and having a hunt around for some tins to put the mixture in.   I have more than a dozen of the tins that I wanted to use...somewhere....Finally found a couple, poured the melted wax into the tins and let it sit and set.  Looks good and no manky oil smell so that's good.


I used a rag and rubbed the mixture into a boot.  The left foot boot, the one on the right in the photo, is the boot I did first.  The wax rubbed into the boot, making it look dark. 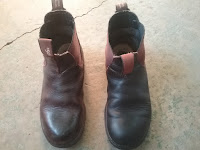 Put wax on the other boot, let it soak in a bit then rubbed both boots over with another rag.  The boots are darker than before I used the polish but I haven't worn them outside yet so don't know if they are protected from the wetness of early morning grass.  I will try them out soon and let you all know. 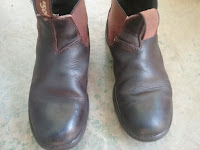 I haven't done husbands boots yet as he has been wearing them all day but I will try and get his done tomorrow before he puts them on and ask for his opinion tomorrow sometime.  Not that he will have one.  To him boots is boots, whether they are clean and shiny and waterproof or not.
But I had fun.  I made me some bootpolish and it made me smile.