After being sore and tired all week and arms being next to useless yesterday I woke up this morning feeling OK  so I have been out pulling up plants that I no longer want.

All the red cabbages are gone, I have 3 nice ones inside to do something with.  I don't think I'll plant these again as we prefer the green ones.  The red ones did seem to survive the slaters and cows better though...There are still 3 out there growing so will think on it.
I pulled up all the peas that I couldn't eat *skin and all*. Some were just too tough so they are gone but there are still a few plants left that have nice peas growing on them.  I still need to pick and freeze the peas.
I pulled out most of the Caulies. They were starting to open too much, not getting a decent size, so there are 6 of them waiting to be cooked or pickled.  Still have 4 OK looking ones out there.
There are 2 big green cabbages.  One of those will become coleslaw, not sure about the other.  Probably sliced and frozen for later.

So I now have heaps of garden space that needs to be worked on.  Later when it is cooler I will add more dirt from the chookpens, add manures and top with mulch.  It will then be ready for whatever I need to put in. 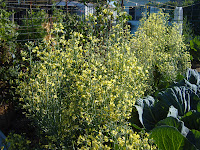 The Brocolli that the cow ate the tops from a few weeks back regrew but  because I wasn't quick enough in picking the smaller heads it  all went to seed so out it came.  I have kept one to collect seeds from.


I have used the excuse of being sore all week for not getting out there before now and unfortunately I haven't planted anything at all this month so I will need to step that up over the next week or so.

None of the watermelon or rockmelon seeds that were planted during September survived so once again I will not get those growing as early as I wanted to.   We have 8 tomato plants flowering but I want to get more going.   The cucumbers aren't doing much. 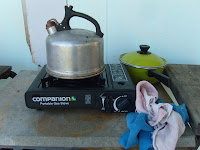 I think most of the seeds that went in the ground were eaten by the slaters.  There seems to be millions of the little buggers and after this years challenge of growing all our vegetable is up I will get the chooks out there to try and clean them up. In the meantime I used the *boiling water* method again. 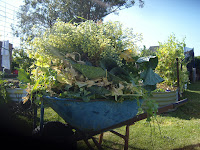 In the meantime they, the chooks,
have an overflowing barrow load
of leaves and stuff to get through.