Our lemon tree is so full of lemons, I don't think we will ever get through them all.  Hubby picked another bucket of them on Sat so I have spent the weekend trying to use them up.  He juiced them and we ended up with 2 litres of straight juice. 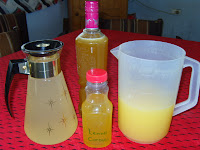 I made Lemon Cordial.  I rarely drink anything except water (and coffee) but Hubby does when it is hot.
Or there is no Coke left!

This is such a simple recipe and it was so nice that I wont  buy lemon cordial again.  The first lot was made from following a few recipes that I had, they were all more or less the same and I said to Hubby that I wanted to use less sugar.  He talked me into following the recipe but I was right, it was way too sweet even for him.  I just added more juice to get a taste we both liked.  I halved the recipe to start with , to see how it tasted but will make heaps more and preserve it in a way that I have read about.
The recipe we used is below.

Lemon Cordial.
600ml straight lemon juice.
600gm sugar.
Put in pot and heat, while stirring, until the sugar dissolves.
It is now ready to use.  Add water to taste.  Ice if that is what you like.  How simple is that?
Not very expensive to make, it has nothing *fake* in it and the people that I used as testers all said that it was very nice.  I did ask them to be honest in the remarks but as they all had more than one glass and there were other drinks on offer I'm taking it to be a keeper.  I added homegrown passionfruit, made into  iceblocks to the jug of made up cordial and that added a nice taste as well.

So that is a cheap recipe but I wanted cheaper.  I had a thought and made this.

Lemon Honey Cordial.
400gm Honey  or 1 cup. (I used Powder Bark as I had a bucket in the kitchen)
500ml Lemon juice.
Heat, stiring until honey has disolved.
Bottle and add water to taste.

The taste of the honey comes through so will vary with the type of honey I use.  Probably wouldn't be cheaper if you had to buy the honey.

So what to do with all the skins instead of throwing them to the chooks?
Yep...Candied Lemon Peel.  I really like that stuff. 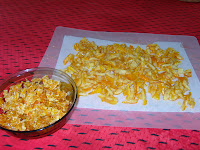 Boil lemon peel in water for 5-10 minutes.
Strain, and repeat with fresh water 3 or 4 times.  This removes the bitterness from the pith part of the skins.
For 1 cup of peel use 1cup sugar to 1/2 cup water.  Bring sugar and water to the boil, add peel and boil over low heat until the syrup is reduced.
Spread out to dry.
I spread it out on some kitchen paper that I had here from the last lot I made and I will save it and use it again.

So what else could I make with this stuff...thinking, thinking, thinking...Jelly!  Using the cordial as the base.
I have never made *real* jelly but have always meant to so this was the time.
My research showed that you use 1Tbs of gelatin to 500ml of liquid so I halved it, again I wanted to taste test before making lots and made it up. 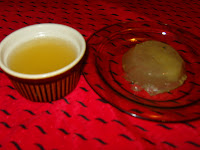 250ml or 1 cup of made up cordial.
1/2 Tbs gelatin
I heated 1/4 cup of the cordial and whisked in the gelatin, added rest of cordial and poured into dishes.
Let set in fridge for a few hours. 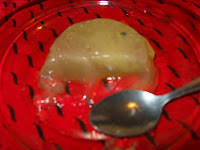 This is the end result, after maybe 4 hours in the fridge.
It has set firm but is not rubbery at all and the taste is divine.
Hubby was impressed and the sugar filled jellies from the shop are now a thing of the past.
I will experiment with different flavours of these.

I also made some Lemon Spread.  I call it lemon spread, it could be curd, butter, some other name... 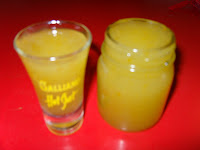 It has  no eggs and is quick and easy so stays in the recipe bag.  Did do it a tad differently this time but it still passes my taste test but *may* not be as nice as I usually do it.  I will make another batch and compare the two, next week some time.
It didn't make too much, that's a shooter glass there to give you some idea on the size of the jar.  There was a few spoonfulls that didn't fit in either container but that's how I managed a decent taste test.

Lemon Spread.
1cup water
3/4cup sugar
1/3cup lemon juice
2Dsp cornflour.  Or 1Tbs CF and 1 of custard powder.  This makes it nore yellow.
grated lemon zest ! or 2 depending on taste.  I like adding more than 1.

Heat water, disolve sugar, I disolved the CF in the juice then added that to the boiling water/sugar mix, stirring all the time.

Because it has no eggs this is great for making when the chooks go off the lay.

I keep it in the fridge but I don't know how long it would keep for.  I make it up as I need it.
I will keep the juice in the freezer.

You can have it on bread, toast, use it in tarts or baking or eat it out of the jar, using a spoon!

The original recipe called for a cup of sugar but that was too sweet for us so play around with it and tweek it to meet your taste.  Original recipe also had 1oz of butter but I don't *do* butter so I leave that out.
Posted by Barb. at 8:30 AM