Awhile ago, not long after one of the fox attacks, a mate of the sons said that we could have a trap that he had made, been used and had caught foxes, he didn't need it anymore...But it wasn't here, he had to travel to get it, next time he was there he would pick it up for us...Fast forward a couple of months, 2 more fox attacks, talk of using baits and the son was right onto it and we now have it.

It is bigger than I thought it would be.  We have borrowed one before and it was smaller, lighter, I could move and set it.  This one...big, heavy and I don't know if I can or not.

We were told we would need to wash it to remove human smell and then to move it wearing welding gloves so we didn't put our smell on it...Would a fox care that much...I dunno...In case he did care though I put the trap in the chookpen for a few days.  I threw bedding from the chook shed in and on it and I threw food in it to get the chooks inside it.  I'm hoping that all this will get it to smell more like chooks and less like us.  To the fox it should smell more like food than people. 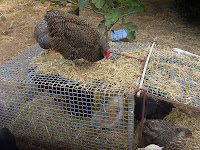 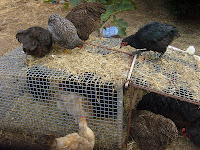 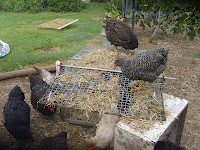 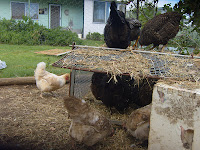 I left it in the chook yard for a couple of days then I donned the welding gloves and dragged the trap out the back out to the dam area.  It was heavy and awkward and I walked through 3, yes 3!! spider webs.  ahhh, I hate those things and we seem to have them everywhere.  The trap is now near where it should be.  I can't get it to where husband wants it as it needs to be lifted so he will have to do that when he gets home.  I wanted it out there sooner than next week though so any foxes can get used to it being near their path.  I haven't set it though but will try to do that tonight.

And what bait will we use?  Husband wanted to sacrifice a scrawny Mixed Breed rooster...I wasn't as keen to do that but did think we could cull a couple of roosters, we eat the meat then use the head and guts in the trap...  and we will still do that but when I put the trap out last night I put a chunk of rabbit near it.   And where did this rabbit come from?
ROAD KILL!!!

I have wanted to use roadkill for something for ages but haven't due to the yuk factor.  But this will be a bonafide use of an animal body.  It will save the dead thing from being squashed into the road and pecked at by crows.  It is a good thing we are doing.

Husband picked it up from the road outside our place and cut it into 3 and bagged it up and put it in the freezer.  I have put 1 piece near the trap and I will put a piece on the hook in the trap and try and set it tomorrow.

Daughter that thinks some of the things I do is all a bit manky and was more than a tad grossed out when I told her about the rabbit brought me a present yesterday.  What was it you ask...It was an owl.  A dead owl that she picked up off the road.  Yay, more fox bait.  I'm proud of her.
Posted by Barb. at 6:06 PM

Labels: Animals And Other Critters., Chooks and Chickens.