The front yard work is steadily getting done.  Some bits are a lot harder than others but I think I'm doing oK with it. 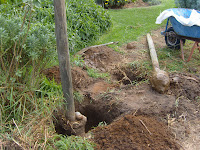 This week I am trying to get the yard tidy and mowed and the gardens looking a bit neater so have been mowing, raking, mulching...and over the last few days I have been digging the 2 posts up.  I dig a bit, mow a bit, back and dig a bit more.  The posts had been cemented it and put in deep so it was bleedin' hard work and not something that I could do in the one go but over a few days I am happy to say that it is one job finished or nearly anyway.  I cannot physically get the second post out of the hole so will need to wait until the son comes out or Hubby gets home.  When one of them lifts the post out I will be ableto fill in the hole.


Both the Bougainvilleas that were dug up and planted along the front fence seem to be doing alright and have new shoots starting to sprout out.  The seedling tree has died so I will pull that up today.  Two daisy bushes are doing OK in their new spot.  One didn't make it so that has been buried in the  hole where the first post came from along with heaps of other garden rubbish and a lot of the Cannas.  I hope they don't start growing from there though.

I have trimmed some of the monster Pepino back and planted some of the rooted shoots.  Some were given to the chooks to munch on though.  I can actually see now that there is quite a bit of fruit in there.  It was all hidden away before.  Lots of snails were hidden under there too but they made good chook snacks.  I will trim it back a bit more soon but have other stuff to do before I do.

I still need to figure out where to plant the Chrysanthemums.  I want to keep these and as they are just starting to flower I need to wait until they have finished then I will cut them back and put them...somewhere.

I don't think it will be finished the way I want before the end of the month which is a bummer but I have the oportunity to go away for a few days so am going to do that as I might not get another chance at that but the frontyard will still be there when I get back.
I will also need some sand or dirt to level the area a bit and that's something I need to rely on other people for.

The bits I can do will still be worked on while I am home though and in saying that I will get out there now and do a bit more.
Posted by Barb. at 11:59 AM

Labels: Before and After. Stuff To Do.