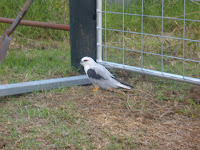 Hubby spent the morning putting in a gate out the back in the fence around the dam area.  A little while afterwards we noticed some magpies sitting on it with a couple on the ground as well.  It seemed strange so we went out for a closer look.  Saw one pecking at *something white* that was on the ground and on closer inspection found this hawk type bird.  It didn't fly away and seemed stuck so the son in law donned some gloves for a closer look.  It didn't look hurt at all but had meat ants crawling over it's legs so we thought we would box it up for the night.  It's possible it flew into the gate...but we don't know. 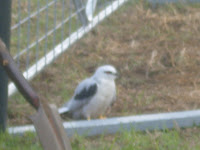 I had the idea to put it in an empty chookpen so it could fly away whenever it wanted to but be protected from predators.  M. put it in the chookshed, on a roost and 4 hours later it was getting dark and it was still out there.
I hope it will survive the night and be OK.
Posted by Barb. at 7:59 PM

Labels: Animals And Other Critters.