On Thursday as I was driving out the gateway I noticed a parcel in the letterbox so stopped and put it in the car to look at later.
My name was on the box but no return address or anything to show who it was from.  But I presumed it wasn't a bomb and opened it. 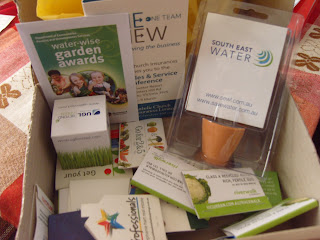 It has heaps of seeds in it and I have been trying to work out where it might have came from.  Well this morning at 2am when I was trying to decide whether to get up or not I remembered.  There was a thread on Simple Savings about sending away for some free seeds and I emailed them so this must be them.  I have been looking on SS for the email address but cannot find it. 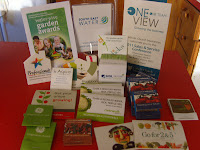 There are heaps of seeds, mostly vegetables but a few flowers and some native tree seeds as well.  Also a couple of tiny, tiny pots. 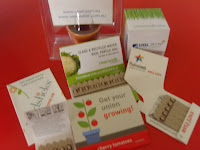 The seeds are on little sticks of cardboard and I must confess that when I first opened the box I thought that it was full of matches.  It took me a bit of looking to see that they were seedsticks.

These will come in handy as well as saving me a few dollars. There are some things in there that I wouldn't buy but this will give me a chance to try them.  Rocket comes to mind.

Now I need to plant them at the appropiate time and hope that I don't kill them all.
That would be a waste of a decent freeby.

Have come back to say *thankyou* to Nicole from over at SS.  It was her that put a link in to get the free seeds.   I found where the seeds were mentioned so will put it here too.
I don't know if they are still doing it or not though.
Posted by Barb. at 7:53 AM

Labels: In The Garden., Money and Savings