"Because I don't know what sort of moth, butterfly, people-eating thing that they turn into I fed them to the chooks"
I thought that the chooks would really enjoy having these as a treat but... 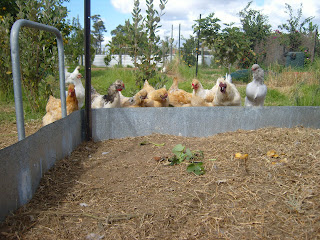 It was like they were scared to go near them.   A bit like I felt when I first saw them! 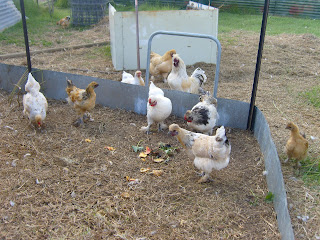 It took awhile but they eventually had a taste then got stuck into them.

Because I wasn't sure what type of catapillar they were and didn't know if they would kill or worse! the chooks that ate them, I fed them to the Mixed Breed chooks first.  Afterall, I didn't want them killing my *Aussierocks*  But all chooks survived so the Aussierocks got the next lot.
Posted by Barb. at 8:31 AM