I am not a very handy person.  I have trouble holding the tools, I haven't much strength for anything, I can't do measurements, I'm short so find it hard to reach things without a step and I'm prone to fall off them...But we live in a tiny hovel of a house that needs lots of stuff done to it to bring it up to most peoples standard.  It needs a fair bit done before it reaches my standards and they are pretty low so that says a lot about how bad it is.  Husband is the handy person but his standards are lower than mine so since we have been living here not much  has been done inside the place.  There is talk of things getting done but nothing is planned for anytime soon.

But there are things that need doing, need fixing.  Like the towel rail in the bathroom.  It is was screwed into a non solid wall and the screws kept falling out and the towels would fall off the loosely hanging rail so I would push them back in and they would come out again so I'd wrap tape around them and push them back in.  At one stage I used blutac to hold it in.   None of that worked for long and finally it was starting to bug me.      I have more than a few handbags and a long time ago I was bothered by the way I stored them by shoving them into the overfilled shoe basket so asked husband to put something up behind the bedroom door so I could hang them up.  He did but he is taller than me and didn't realise how many I had so it never really worked.  The door wouldn't open properly and it hurt me to stretch up to reach the top hooks...

I wanted to make some garden signs, husband started to help me but it ended up that he made way more than me.   He was quicker, could use the tools better, could manage to hold the sander as well as the wood he was sanding...I couldn't even use sandpaper without having to stop too often.   We wanted the job finished so the tools and all my bits of wood could be cleared away but I got side-tracked and he ended up doing what was left...I still need to tidy away the tools and clean up the mess...which I will do sometime this week.  I hope.

A lot of things that I do, or try to,  make me feel next to useless.  The fiasco with measuring and cutting a backing board for a dartboard showed how useless I am with measurements.   You know the saying *measure twice cut once*  I did that then measured again to make sure and was still 100mm too short.  How could that be!!   And  I haven't tried again since.   Having  the trouble making a few simple signs made me feel useless.  I mean, I know I have my limitations but I really didn't/don't like feeling so useless so often.

But feeling useless is not being useless so a few days ago I decided to put all that behind me and try and fix/do a few things.  Simple things, things that even I could do. 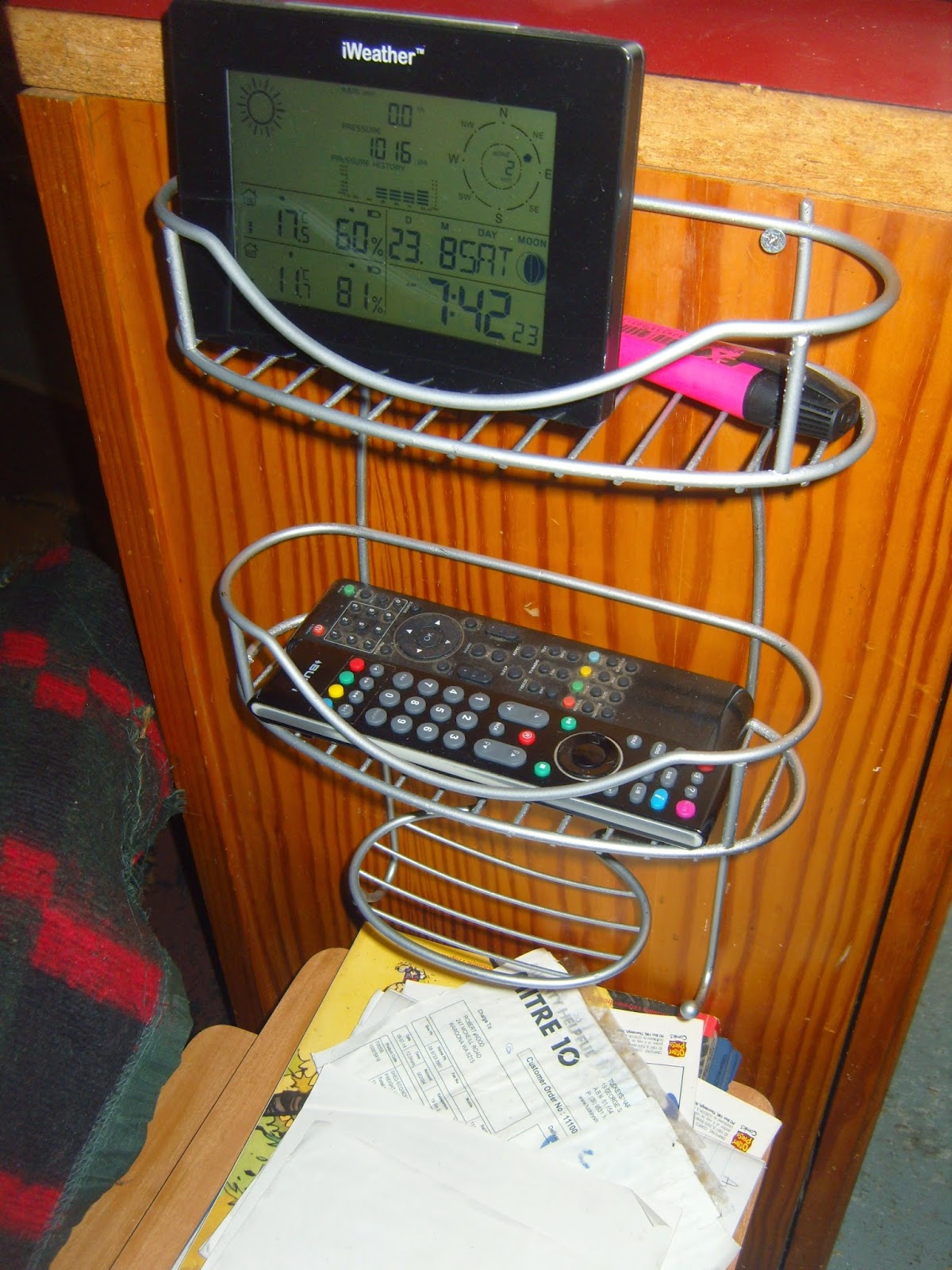 The first was to put up a little rack near where husband sits when he is home.  Somewhere he could put the remote, his fags, other small things.   I found an old shower rack in the shed, it was dirty and had rusted bits and probably should have been binned long ago but maybe it was waiting for it's new purpose...I was going to cut the hooky bit off but couldn't turn the grinder on so had to use boltcutters instead.  That has left a sharp bit at the top but it's not too bad.  Turns out that the grinder I couldn't turn on was the wrong one anyway and the right one wasn't where it should have been.  Still isn't but next time I will know.  I sanded it, washed it, painted it then found a couple of screws and put it up on the cupboard next to his table and chair.  Dodgy but done, it does the job and husband thinks it's OK. 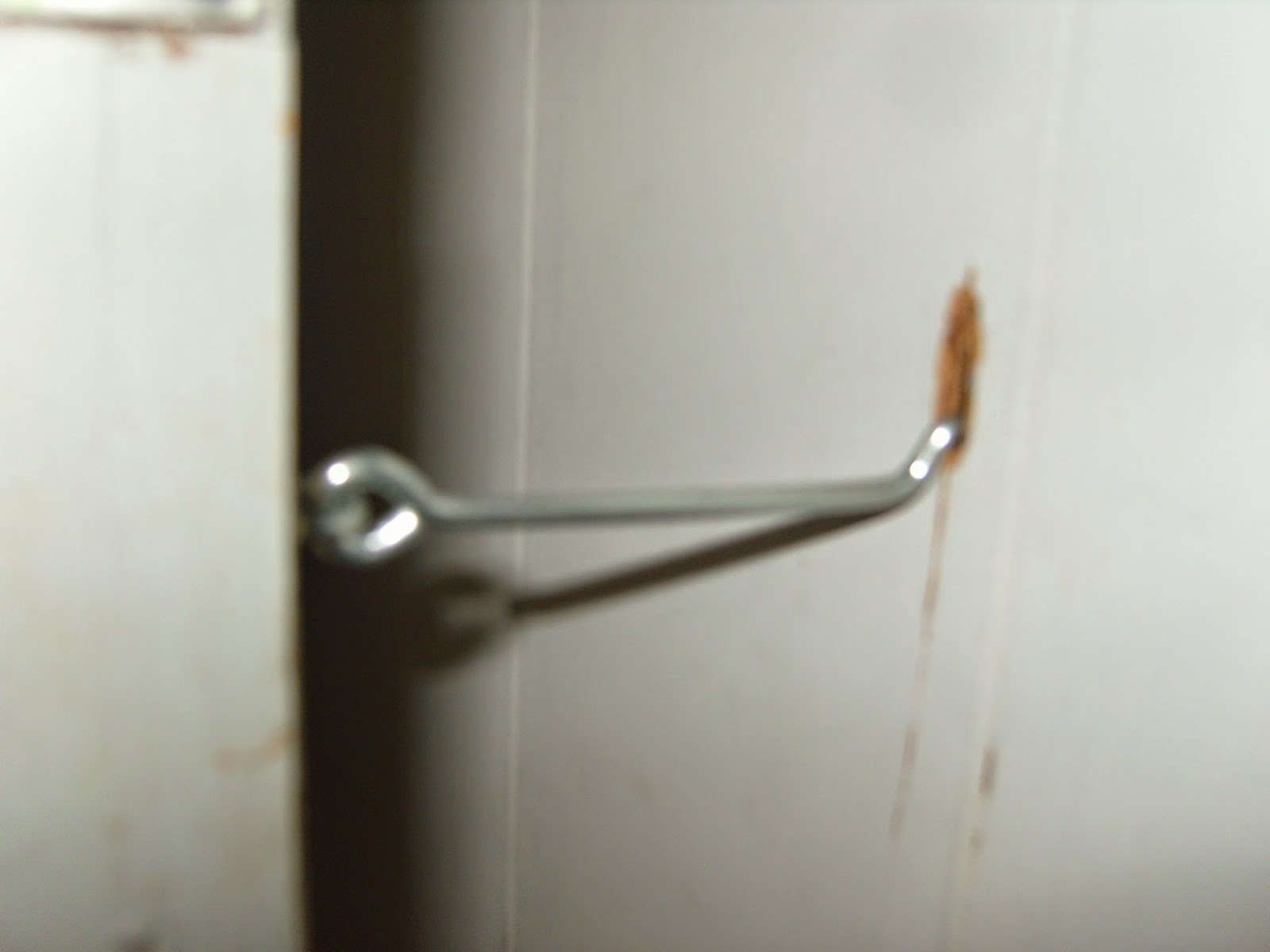 A long time ago we bought some hooks to put on the doors so they wouldn't blow shut when I wanted them open.   I put the first one on the back door.  I couldn't put a hook on the wall as it was panelling and there was nothing to screw to so I just cut a hole in the wall for the hook to hook into.  Dodgy but done and it keeps the door open.

Next was the towel rail.  I needed a drill and I used to have one but have no idea where it is now so have to use husbands.  It is cordless and doesn't have a chuck key, I don't like it but it is what I had.   I took the rail down, the 2 screws that were in the wall were in properly and it took a bit to get them out.   I wanted to put the rail higher and it needed to be put into a stud so it was secure, that was the problem before.  Screwed to panelling not something solid.   I drilled a hole for the screws but it was too big and thicker screws wouldn't fit through the ending holes and I couldn't change the bit because it's a chuckless drill and I can't do it.  Called out to son, he changed it for me and I put some holes in.  Into jarrah studs so that was harder anyway but here's a tip...If it seems hard and you see smoke coming from the hole as you try to drill...it's not because it's jarrah it's because the drill is in reverse.  Change it over, it's much easier and there is no smoke!
The rail endings were finally up but the rail was 8 inches too short.  What to use to lengthen it...Hmmm, maybe an aluminium can cut and rolled...It worked but wasn't strong enough once the towels were hanging so I went searching and found an old rail in the trailer so I cut that down and used that as the extension.  Standing back to admire my handywork I notice the slant.  No matter, it's staying like it is.  Dodgy but it works.

My next fix was going to be the hooks for my bags.  I have too many bags and have removed a few but what is left I like, I use, they are staying.  Husband screwed on 1 length of timber, from top to bottom and put hooks in that and hooks across the top of the door.  It kinda worked but the top hooks were too high and bags were overlapping and the door wouldn't open all the way.  A bummer when it was crashed into in the night darkness...
I removed his very well screwed in screws and took the wood down, measured, cut then cut another 1/2 inch off so the door opened, HoHum...screwed them on and this time I remembered to check the level but the good spirit level was too long and the one that fitted is a bit dodgy so the levels aren't completely right.  BUT!  The door now opens right up and I put a hook on this one too so it doesn't blow shut with the Easterlies. 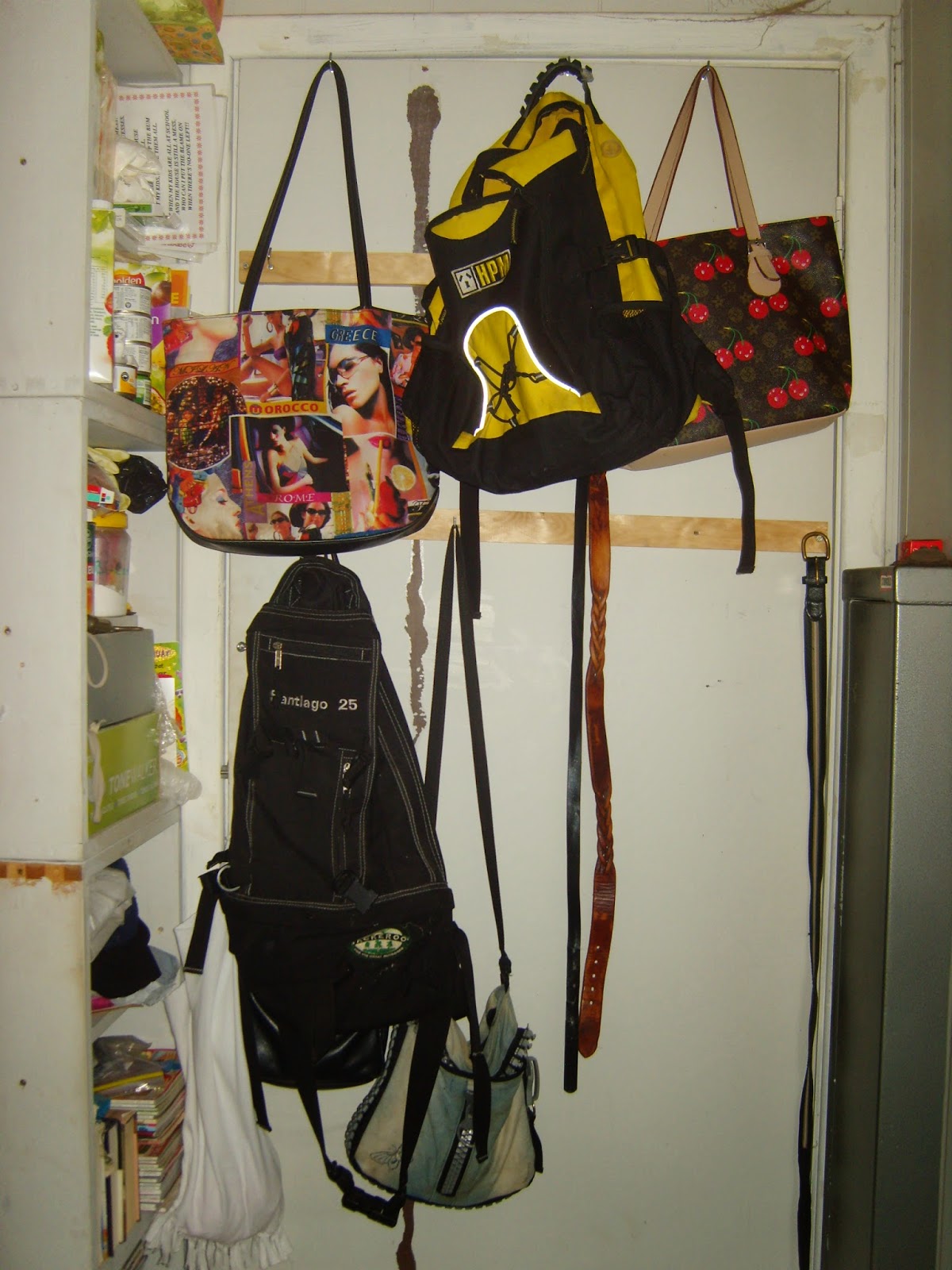 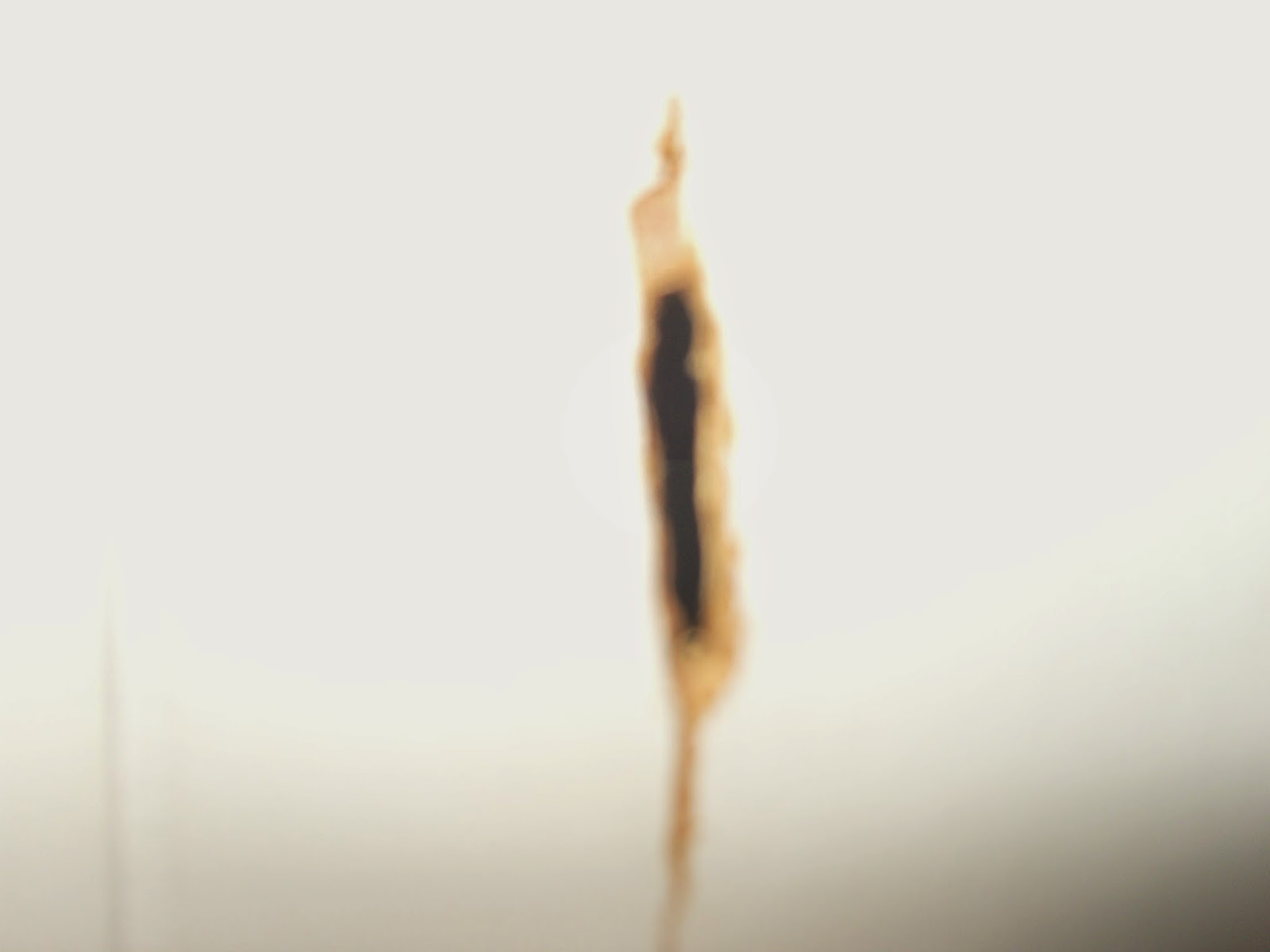 This is the hole in the bedroom wall, not as neat as the other one and because I started to pull the panelling off in the bathroom it is now like a peak hole.   Definitely dodgy this one but it works.


And why did I pull the panelling off?  Because I had the grand idea of building a coat-rack into the wall behind the bathroom door but couldn't work out how to do it.  One day though I will. 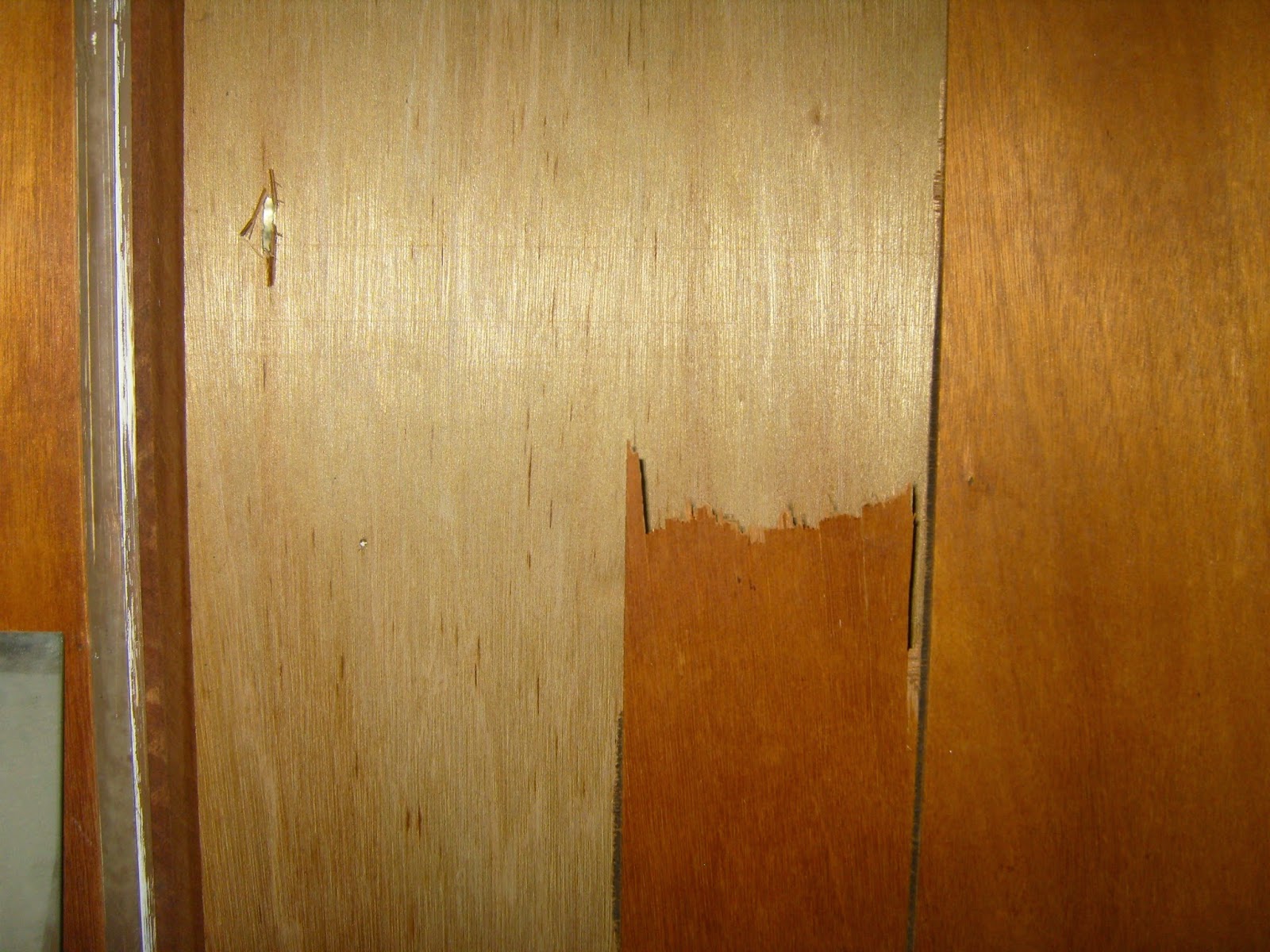 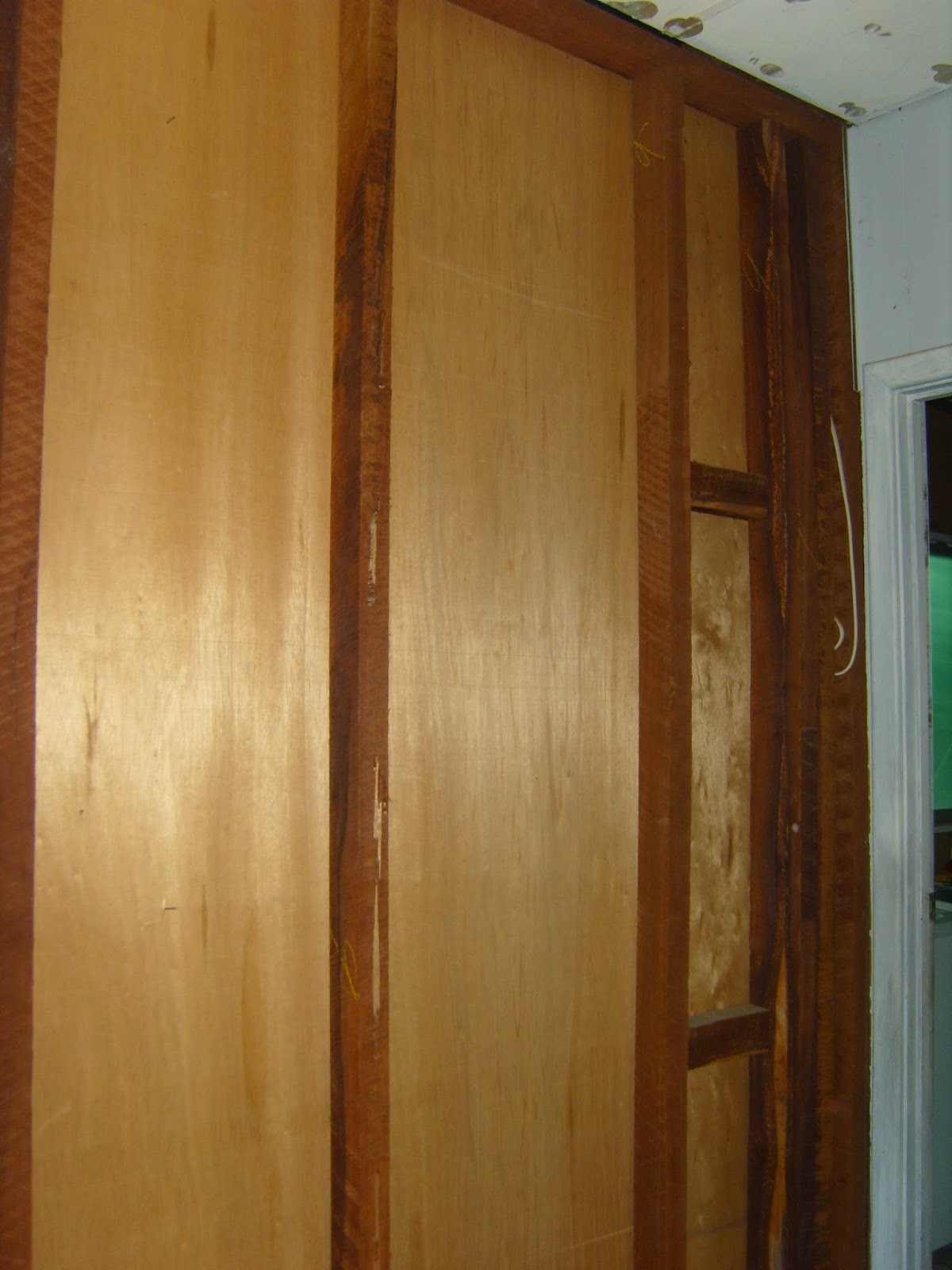 It's a bit like the wall in the living room that I pulled off.  I want a wall of bookshelves here.   He said he needed to know what the wall was like inside to see if it could be done so I pulled the panels off.   We did measure up and have even bought the wood but it's been a long time since and I am still waiting.   He says he needs space in the shed so one day I will get all my stuff cleared and he will have room to work and I will have books to read.


In all of the Dodgy DIY moments I am learning.  Learning what not to do, learning what I should have done, learning what tools work and what doesn't...I have learned that I want need my own drill and set of screwdrivers.  And a shorter spirit level that works.
My drill be a proper power one not a cordless battery operated one.  It will have a chuck key so I can change the bit myself.    It wont be as chunky as his are.  It will be mine and kept in my own little box of tools.   I used to have all this, many, many years ago when I was single, I didn't seem to be so useless, I knew I had to do the job so I did.  Over the years I have come to rely on, and expect, the husband doing things for me but now as I get older again I am reverting to wanting to be able to do them myself again.  And some things may turn out a bit dodgy but I'm sure that as I do more, learn more, practice more they will become less so.
How about you?  Are you a dodgy do it yourselfer or are you one of the capable women people that I aspire to be?