These were on again in our town yesterday and as I have been decluttering I had quite a bit to take down.  And I am pleased to say that most of it went.  There were a few things that I was thinking if they didn't go then I would bring them back inside and keep them but someone needed them more than I do so that is good.  Yes, it is, really.

Because of the weather the markets were held in the hall this time and there were tables set up along the walls and down the middle, most of them were full of stuff.  The first 45 minutes or so were very busy with dozens of people going through everything and taking want they wanted.  It was great.  There was even free tea and coffee with freshly baked that morning muffins and choc chip biscuits. I saw a couple of people taking photos, there may be some on the Facebook page.
Oh!  there was music too.  A group of people were on the stage playing and singing.  Real cool.

I know that the people putting these markets on would have had to pay to hire the hall so it was great to see such a great turnout.  It shows that there is a need for such a thing and if it saves stuff being dumped then it is all good.  A few people knew that the money was coming out of the pocket of the people who organised it so a bit of money was donated to help cover the costs of hall hire.  I think that was real nice of the people who thought to do that and next time I will donate a bit too.  I don't think that the people who organise it should be out of pocket at all but they believe in the concept so much that they don't seem to mind.

I came home with a few things but all stuff that I will use. 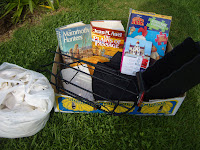 Notice the Earth Children books.  Two of them in hardcover.  A great start to me collecting the series.
I have been umming and arhing about buying a rack for the back of my bike and lo and behold, one was here.  A couple of other books that will be taken to the next one when I have read them.  Some lace curtains in the bag, I'm going to see if I can make them fit my living area windows, if not then they will go back to the next one for someone else to use.  A floor jigsaw for the grandaughter to have out here.  A good haul and not clutter AT ALL!!

The next RRFM is on Sat, 16 July. in the hall as far as I know but check out their Facebook page, become a member, come and see how they work.  I'm sure they will have just the thing you need.
Posted by Barb. at 10:10 AM