This afternoon I made the "Easy Choko Mustard Pickle" from the Year In A Bottle by Sally Wise book.  Hmmm.  It's OK but I must have done something wrong.  I did double the recipe because the kg of Choko it needed was only 3 and as I had a bucketful to use I thought doubling the recipe would be the way to go. 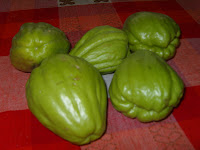 Maybe it wasn't.  I think there was too much liquid for the amount of choko and the cornflour didn't seem to thicken it so I added more but it still didn't thicken.  I was going to let it simmer away but it was getting too soft so I took it off the stove and bottled it. 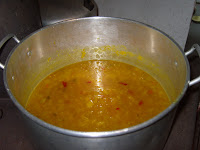 The recipe said the Choko should be finely chopped but I think next I won't make it as small as I did today.

Sometime over the next week I will make up a different batch but I will use my mothers Cauliflower Pickle recipe, if I can find it.  Not sure why I didn't use that today as I know that is really nice when she makes it so I would know if I had the taste right or not.  'Cept I couldn't find it...
With this one, maybe it's suposed to taste like it does... I just had another spoonful and the 5 jars will be eaten as it's not awful and I'll see what other people think of it before I decide if it's worth trying again or not. 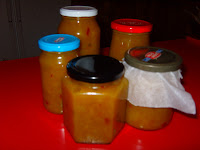 The whole process would have been easier, and safer, if I didn't have to keep kicking the cat out of the way  so I could get to the stove. 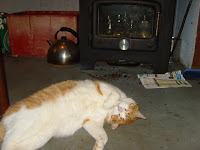