I had a day out in Perth yesterday.  Went on the train with daughter L and her husband M.  It was great.  They showed me how to get the train to Freemantle so now I will be able to do it by myself.
The ride into Freo is nice, the train runs along the water as you come into Freemantle and you get to see all the ships coming in and going.
Once off the train we walked down to a shop called Kakulas Sisters, they bought a few things there and then we went on down to the markets.  I bought a pear to munch on, it cost 40cents .  Felt like the last of the big spenders but it was all I needed.  It was a really nice pear too.  On the way back to the station we walked into a Timezone type of place.  That was loud, noisy, lots of people...but we stayed a bit and walked around.  We probably stayed longer because M found a card that still had a bit of credit on it and we *had to* find a game to use it up on.  I then found a card that had no credit but100 points and as M's card had 13 points we got to spend the points at the counter.  We all ended up with a smiley face keyring and we got a big pencil as well.  It added to the fun but I suppose "you had to be there" to enjoy it. 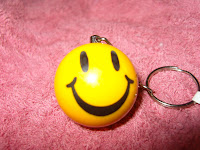 Then back to the train station.  I "had to" use the loo there as I had been told that they were pretty cool looking and they were.  Massive and old style room.  If you are ever at Freemantle train station have a look for yourself.  I'm sure you will agree with me.
On the train leaving Freo we saw some dolphins, that was also pretty darn cool.  Then back into Perth and on our way to Kakulas Brothers.  L and M go here quite often but this is the first time that I have been here.  It is the same family as the shop in Freo that we went to but prices are not always the same.  I think they get most of their stuff from here as it is close to the train station and the backpacks can get pretty heavy.  I didn't buy much, I mainly wanted a look and some lentils but it is a great shop for bulk stuff.  It has flours, spices, grains, coffee...heaps of stuff.  Well worth a look if you are in the area.  Well, well worth a train ride actually!
Then back home.  It was a long day and I did end up with a headache but 2 coffees when I got home soon fixed that.  I am starting to like this *day out in Perth* thing.  Anyone want to come with me next time?
Posted by Barb. at 8:05 AM

Labels: Friends and Family., Out And About.