It's Choko time again and though Hubby isn't too keen on them I think they are great.  They don't have much taste by themselves but they do take on the taste of whatever they are cooked with.  And I *have permission* to plant a few more.  Last year I had a massive one out the back, it had been growing between a couple of the tank gardens for around 3 years but last year after it died down after fruiting, as they do, it was eaten by slaters.  Luckily I am a slack gardener and had left a few fallen fruit in one of the tanks and a couple sprouted and they are this years vine.  It's not as big or as healthy as the last one but is still giving us enough fruit.  I say fruit but it is probably classed as more of a vegetable.  I planted a few more around the place last year but not many survived so I have 2 growing and giving us fruit now. 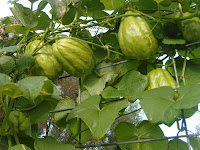 I will plant a few more this year as eventually I want to do away with the one out the back as it shades the big tank garden too much.
I add them to all soups, stews and one pot meals.  The daughter added 1 to her vegetarian lasagna that we had for last nights tea.  I use them as a dessert by adding to apple or pear and cooking them and serving as stewed fruit.  I actually add them to most things, much to Hubby's disgust.
I have a bucket of fruit inside now waiting to be made into pickles.  I was supposed to do it last week but haven't yet.  I did make some into a Bread and Butter Pickle and they are really nice but these ones will be more like a Cauliflower Pickle.  So...Best get to it.
Posted by Barb. at 11:25 AM