The chooks dug up all the Nasturtiums a few weeks ago when they all kept escaping (the chooks kept escaping, not the Nasturtiums.Silly!)  and though there are some more coming up the colour from the Nast flowers is sorely missed.  I was wandering around out there and whinging thinking that I had no flowers but Hubby said I had heaps, I just wasn't looking right.

Yesterday I took the camera out and had another look.  Not a lot but I found some.

I have a few Marigolds out in the big tank garden.  Most of the flowers are dying off now though they still make a nice display.  But when they are finished there is nothing to replace them.  I do have heaps of seeds so will sprinkle some around the place and see what happens. 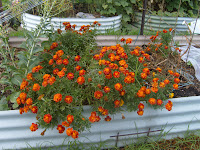 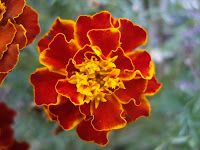 I like these Daisy things and have a half dozen or so around the place.  I should get more growing as they are pretty easy. 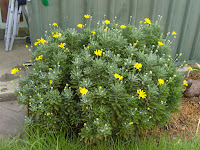 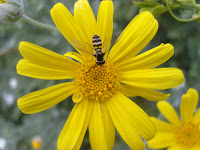 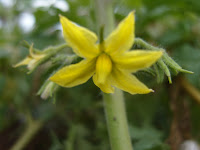 You can sometimes see the Peanut flowers but I don't count them as they are only around for a little while then they go underground. 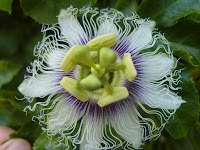 The Passionfruit flowers *might* be counted as I do like them
and they are around long enough to appreciate.
What else is there...Not a lot.  There is a purple daisy type thing that I keep pulling up and it keeps coming back but that is being pulled up again this week so though it's pretty I don't want it in the yard.  I have planted some out the front and will put these ones out there to.  If they survive they'll get to stay out there. 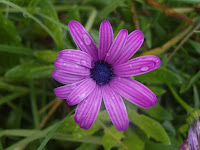 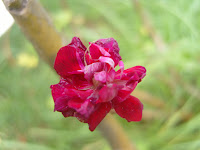 This is the one and only flower left on this plant and it's half dead so it definitely doesn't count.  I call it a Geranium but it could be a Pelargonian.  Doesn't matter much, I like them when it is in full bloom so will take cuttings and  get more growing.  I have 2 of these at the moment but I chopped the bigger one , that had heaps of flowers!!, down a couple of weeks ago.
I think I am missing the colour from the Bougainvilleas.  They could be seen from any area of the yard and I really liked them.  Now they are gone everything looks dull.
Hubby is not keen on growing anything that he can't eat but as I am the planter and plant lookerafterer I will get some more colour out there.
We need to feed our body but I need to feed my soul as well.
Posted by Barb. at 10:26 AM