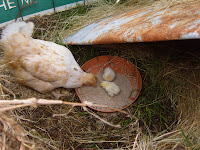 Well as of last night I have 2 little chickens out there.  So tiny so probably have more bantam in them.  There was a bit af a drama though so I am hoping they both survive.  I didn't get to check them until close to dark yesterday and one had fallen out of the nest and was huddled next to it.  I picked it up and put it back in with its mother but then thought that the same thing could happen again so I got some hay to put in the pen and tipped mumma and babies out of the nest and left them to settle.  She sqaurked and carried on for a bit but soon tucked them under her so they should be OK.

After tipping them out I found the third chick dead so the nest needed to be removed and cleaned so glad I did that last night.
Posted by Barb. at 6:35 AM