Garden wise everything is growing.  Mainly the grass and the weeds but there is still enough out there to eat and we didn't need to buy anything duing June.  I love that!  I'm not putting all that much effort in and still managing to feed us so it shows that it's not too hard and anybody with a bit of dirt could grow themselves a feed.

We had a few freebies throughout the month, a meal or two, some meat, bread.
The fire was burning most of the time so lots of cooking and baking was done.  Not too sure the baking is a good thing though.  We eat more when the fire is going and really, that's not something either one of us needs.

I made an orange Cake.  Made with a whole orange *mashed* up with other stuff.  Tania over at Outback made one with a recipe from  Down To Earth.  I have seen similar, some used oil instead of butter but seeing this was there and I had an orange...I thought I'd give it a go. 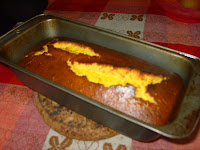 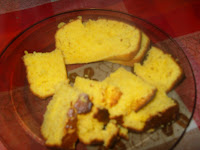 It was OK.  Hubby liked it but I don't think I'll make another one.  Too much sugar and fat for me to enjoy the making of it and though it was nice and moist I will try different recipes and find a healthier one.  Though Hubby likes me baking things I seem to be the one that ends up eating most so *healthy* is better.  Daughter *mentioned* in a negative way, all the veg that I added to the sausage rolls but that is what I do.  It makes me feel better about eating them and serving them up to people.  At least I feel a bit like I am giving me, and them, a part of our daily five.

There have been lots of stews and one-pot meals though and they are meat and heaps of veg so though we eat too much at least it is mostly good stuff.  That's my reasoning anyway!

We are eating oranges, so nice fresh from the tree.  We had a few mandarins but those trees are still young so not a lot.  We have about 10 more out there that might be ready sometime  next week. 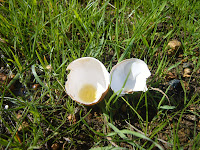 We didn't get any eggs but I am pretty sure that the chooks did lay but that the crows pinched any eggs before I got out there to get them.  We found a few eggs shells around the place and there are lots of crows in the area.  That's something that we are now working on.

Husband is building me another chook house.  It will be big enough to keep the chooks in overnight so eventually it will be easier for me to go off overnight without having to rely on other people to come out and lock them up when the foxes are about.  And they are about at the moment, I can smell them whenever I walk out the front gate.  Hubby says it's my imagination but as other people have commented on the stink I know I am right.

The front yard is still not finished.  I wanted the chookhouse and he can't do everything I want so I need to make choices and what the chooks need is more important than what I want.  The front will still get done.  It wont happen overnight...but it will get done.

So that was June.
We are already into July and if I don't want to get more behind then I need to get out there and do more.  Maybe now will be a good time for that.
Posted by Barb. at 2:26 PM