Over the last year or so I have been putting stuff out in Hubbys shed with the intention of having regular garage sales.
I have had 1 garage sale in that time and though I was going to have more for one reason or another they haven't happened.
This morning Hubby wanted to get things organised so he could have his shed back and I was going to take most of the stuff to the op-shop but remembered that L had said they throw a lot of stuff out and she has had a couple of *free garage sales* that were quite successful so I am doing the same. 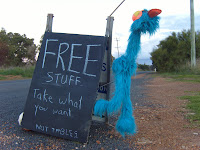 I have put a sign out the front saying the stuff was free and loaded up a couple of tables.  We will put more out throughout the week and see what happens.  People have already called in and helped themselves so it is a win-win situation.
What is left will get taken to the op-shop but I will put a notice down at IGA on Monday and see how that works before I do so.  I need to declutter inside as well and this free garage sale will be the first thing I do when I start.