I have spent the morning outside, not achieving much but did get a few things done.  I pulled the last of the corn out and have 3 cobs left but they will be gone by the end of the month.  I have dug over and *fed* the area and will plant broad beans there.
Picked the last watermelon so hope it's a good one.  It's a moon and stars sort and I don't think they are as nice as the big oval ones that we used to buy.
Pulled the rockmelon up and ended up with 2 fruit from that.  They will probably be mushed up to use in smoothies or as iceblocks as we don't seem to eat them just as a fruit.  Not sure why as they are quite nice, much nicer than bought ones.
This tank garden is full of slaters so I tried putting a couple of the *AussieRock* chooks there to eat them but the silly things wouldn't stay there so I locked them back up.  Will see if I can fence them in somehow next weekend as I can't see many plants surviving if the slaters are left there.  More cabbage seedlings have gone from the end of this garden and I'm blaming the slaters for that.  I see them on the stems so I think they are eating through them and the plants wilt and die.  As you would.
I have more seeds in but not sure how they will go.  The other lot of seeds didn't do too good but I have to get something to grow or we will won't be eating many vegetables over winter.
Except for chokos.  They are doing really well and the vine is starting to spread everywhere.  Hubby even used some small ones in a stirfry he did the other day and he is not that keen on them. 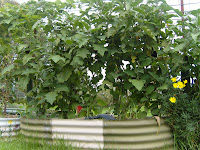 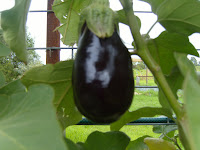 Eggplant may have to be used a bit more too but neither of us are that rapt in that.  But plantkillers can't be too choosy aye.  We can only eat what grows and until I get better at this growing lark it looks like it's chokos and eggplants.  Wanna come for tea?

I grow Eggplant because I love the look of the plant, they are easy to grow and I was  hoping to use it as a bartering tool or a givaway veg.   Looks like we'll be needing them ourselves now though.

The chokos are grown as I don't mind them.  If you can get a plant to grow they produce heaps, they take on the flavour of what they are cooked with so can be used for most meals. 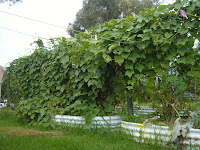 This is one choko plant, it has been growing in this spot for 3 years now but this year it has spread out a lot more.  It fruits now, Autumn, then dies down to nearly nothing and will regrow months later.   It is the only survivor of 8 planted chokos.  Over the last 3 years I have been trying to get more to grow but haven't really succeeded.  This one is even taking over the clothesline. 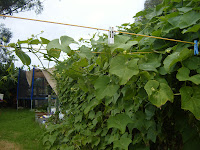 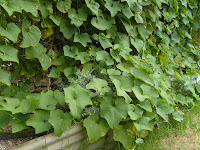 Somewhere under there is a curry bush.   Oh well, I only grow it for he smell, at least we will eat the chokos.
Posted by Barb. at 12:15 PM