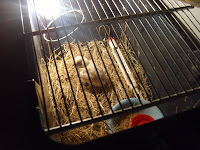 I was kept awake most of Wednesday night by this chilcken.  You'd think that he'd be a little more grateful and shutup so I could sleep seeing as I was trying to save his life.

I had this one's Mum and him and his sibling running with the mixed breed chooks during the day but I lock these ones up in the evening.  This time I forgot and this little one got trampled in the rush when I fed the others.  I found him later, laying on his back with blood on his face where he had been pecked.  Picked him up and put him right way up but he fell over so I put him in a crate with a light in the bedroom so he was safe from the cats.

Half way through the night I even found the feather duster and put it in with him but that didn't work, it still cheeped.

Made sure he had food and water the next day as I wasn't going to be home and when it was still alive that evening I took him out to see if his mum would have him back.  She did so now it is out there running around like nothing had happened.

It is much better when I get one to live instead of finding them dead.  It better not be a rooster!
Posted by Barb. at 1:28 PM