The day had come, husband was home and we were off to get my hive.  I wore a pair of his overalls, an old bee hat of his with 2, yes 2, nets over that.    He gave me a pair of gloves too so I was well covered. 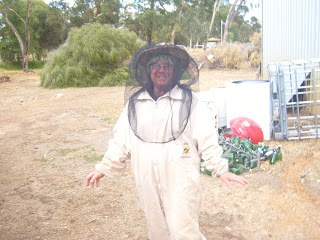 This is the hive, a 2 decker and in such bad condition that when husband saw it close up he was a tad concerned about moving it.  It actually wasn't that old, a few years, but it hadn't had anything done with it since this bloke set it up here in his paddock.  The boxes are smaller than what I consider normal hive size.  I have been told that these are WSP size.  They are 10 frame boxes. 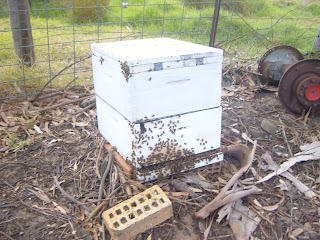 Up close to this hive it was easy to see that there was woodrot, or something, affecting the boxes and when husband tried taking the lid off the box did break.  The box was so full and stuck together that when he pried a frame out the box broke some more.
Our first plan was to take some of the frames from this top box and put them into another box so we could take this box of frames home but because of the state of the hive it was too big of a job.
It was just as well that we had spend the day before putting together new boxes and frames because we needed them to replace this.   It needed  lot of work

This is husband, looking at the box and deciding what to do with it.  There is a hole in the bottom box too, the whole hive is rotten. 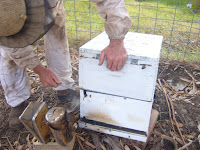 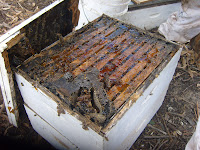 Finally he gets the lid off, it was stuck tight.  He needed to scrape it off to be able to get the lid back on. 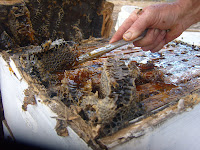 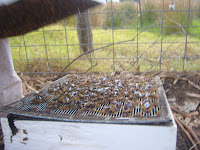 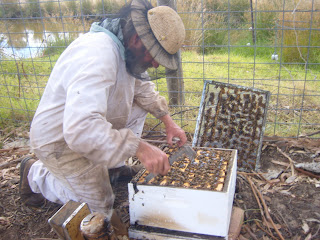 The excluder wasn't sitting flat because the hive was so full.   Notice where it is rotten and breaking up.  Notice too how he isn't wearing gloves.  He doesn't like working in them and does get stung.

We were going to take the top box and replace it with a new one and pick it up an a couple of days but because it needed so much work we decided to come back that evening and pick it up so we could work on it at home.  We did leave another box in it's place so any straggler bees would have somewhere to go when they came back and found there home gone.  We picked that up early the next morning and added them to the original box.

This original top box broke, it is rotten all the way through and needed to be replaced. 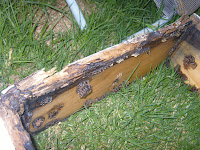 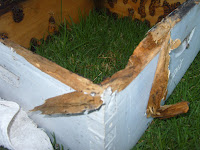 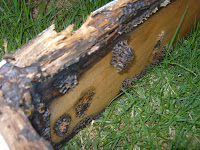 The bottom box has similar issues but is still being used at the moment as it is full of brood, and the queen, and needs work.  A new top box replaces this one.  We have a new box ready to replace the brood box as the husband works on getting the whole hive in order.