To Bee or not To Bee

Husband works with a beekeeper.  It is hard work and he gets stung many times every day that he works.    He has been stung so many times but it still bothers him.  They fly near me and I run and squeal...like the SookyLaLa that I am.  No wonder he shook his head and laughed when I said I might get myself a hive.

But some things are meant to bee, haha, and I have been offered a hive, just one but I said to husband that I would do all the work with it myself.  More head shaking and funny noises.

We have been to look at it and it is chockers, the bees look OK, they weren't aggressive.  The bloke giving it to me hasn't worked it for a long time, he is not well, his house is for sale and he wants to travel...He has extra frames and a few boxes he says I can have too.  How nice of him so I told him that he can have the first lot of honey I get from it.  I have found a spot to put it and have cleared that so it is ready as soon as husband has time to pick it up for me.

Another thing to show me that I am supposed to get this hive is that the husband is working in the area and coming home every night.  Earlier this week he brought home the *dogs vomit* which is what they call the scrapings from the nukes they do.   A couple of buckets of smooshed up wax and honey.    I rang the boss and asked, pretty please, if I could have it.  He said I could so I pushed my luck and asked if I could have it all the time when they are working this area.  It's only for a month or so a year and there wont be a lot, maybe a few buckets full.    They do put it through the plant but when husband works by himself doing the nukes it's easier for him to bring it home here.  My *processing* it actually saves it having to be stored here and taken to Perth sometime.

I reckoned it would be a good opportunity to see if I could handle bees flying around me and the stickiness and mess that goes along with the job.

I must admit that the husband set up the buckets to drain into a second bucket.  He also squished all the wax to get the honey to come out.  It had live bees in it and I didn't like having to squash them but because they were covered in the honey they wouldn't have lived anyway, they were damaged and struggling to move.  It's not nice though so shows that it will be important to keep everything covered and away from bees flying in.  And they do fly in. 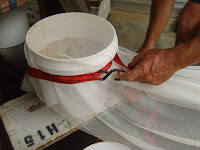 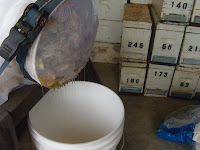 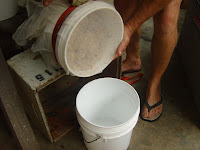 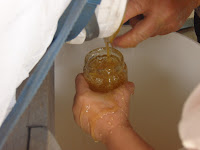 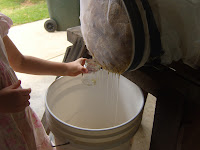 And what better than filling up a jar to take home with you.  Or fresh honey on bread for a quick snack. 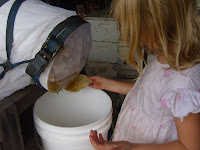 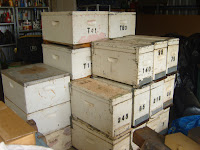 Hundreds of bees are hanging around the shed still but that is because there are hives in there that need to go back to the processing plant in Perth.   I will have to walk through these bees for another few days, until the hives are gone and the shed has been cleared of honey and wax smells.   I haven't been stung yet, I am wearing shoes when over that way but no bee gear, no overalls or bee hat and net.  Like I keep being told, the bees aren't wanting us, they want the honey they can smell. 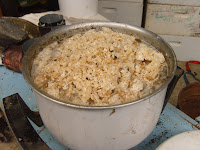 We used an old deep fryer to melt the wax.  We half filled it with water then put some now emptied and washed wax in, brought it to the boil, turned it down a bit while we used a bit of mesh to scoop off all the cruddy stuff from the top. 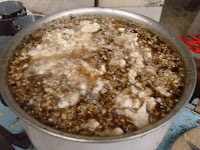 Husband cut some cans down and we scooped the wax from the top to make 5 of these.  The next lot I did by myself, alone, with no help...my wax is nowhere near as clean and I need to remelt it and do it again.
HoHummm. 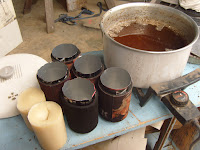 I don't know what I will use this for yet.  I have some wick and will make a few candles but we don't use candles so don't need a lot.  I'll probably just bag it up and leave for the mice to eat but I hope not.  I hope I put it away properly and use it so it's not wasted. 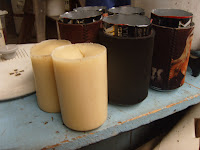 There are beauty products that can be made with this, or furniture polish...I use neither so don't know if I will try that at all.  Do you use wax like this for anything?  Do you have a hive and collect your own honey?  Tell me it's a great thing to do and I will learn to not mind the stings too much...