I have been feeling like eating sweet stuff for the last week or so.  Lots of sweet stuff, maybe lollies...There isn't anything here though and though the husband keeps suggesting that I go into town and buy something I have resisted.  There aren't many lollies in our small town that come in a non plastic bag.  Husband says I gave him the urge too so I made him some Honeycomb.   It was OK.  Tasted alright but is kinda powdery and crumbly.  He hasn't eaten it though so I'll not be making him anything like that again.  I have had some but it hasn't settled my lollie craving so today I made some Lemon Meringue.  Not a pie as I don't have it on a pastry base, I just have lemon with meringue on top. I made my normal mixture, put some in two cups and the rest in a pyrex dish that went into the oven.  Daughter and grandaughter came out just as I finished so they had a cup and I had a cup, not been in the oven.  Raw meringue still taste good.  Though it is probably not called meringue then just beaten eggwhite...  Anyway it was good and I no longer want lollies.   Could have been more lemony but I say that every time I make it and still don't add enough zest.

The cooked one is out of the oven and we will have the rest of that after tea tonight...if there is any left.

This is not todays but they usually look similar to this.  Yum. 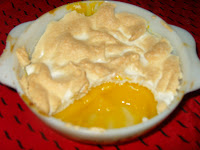