It's been wet and cold here today but this afternoon I decided to get outside and do something.  Maybe clean up the shed a bit.  Maybe clean out the chookhouse.  Maybe pick more oranges for the stall out the front.  Maybe put away the stuff that I have been dumping on the table out the back... 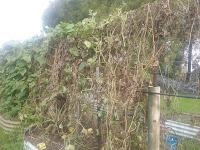 The chokos are finished though.  The vine is looking messy.
I ripped most of it down, fed some to the chooks, some to the sheep.

Some of the dead vine was put in the chookpen to try and stop me from slipping in the mud. 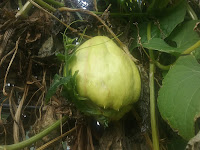 There aren't any more fruit worth eating, all are now old and tough and most are already starting to shoot ready to grow into new plants.  The garden beds are full of these and some have already started to send down roots and get themselves established for next season.  One or 2 didn't even wait to hit the dirt, they were growing as they were growing... 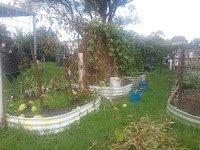 There are 4 tank gardens along here and although the choko vine was growing in only 1 the vine itself covered all four. I have pulled the vine down from over 3 tanks and will get to the last one during the week.  Up the southern end though the choko is mixed up with a passionfruit vine so I will need to be careful pulling it down.


Once all the choko vine was removed from the fence above 2 tanks it was easier to see what was in the ground.  I found a pineapple plant.  This has been here a couple of years now and not doing much so will need some care to get it to fruit.
I cleared out the tank that had asparagus growing in it seeing as that was finished and the fronds were all yellow, brown or dead. I cut it all right down, threw on some smelly water from the comfrey bin and will maybe mulch it sometime during the week.
Posted by Barb. at 9:41 PM