A while back now some people over at Aussies Living Simple set out a challenge.  A challenge to grow a giant pumpkin. The seeds are from an Atlantic Giant pumpkin grown by a member of ALS.  Seeds were sent out to people who wanted to join in the fun.  I was one of them.

Sometime during August or September the seeds were sent out to me.  I recieved 3 as did a daughter.  After letting them sit on the bench for awhile while I worried about what to do.   I finally decided to just do it.  It was a fun thing not a life engangering thing so not sure why I was so worried about sticking a few seeds in the ground.   So I went out and dug 3 holes and filled them with cow manure that I collected from the back paddock.  Filled the holes in and covered them with mulch from the chookshed and left them to sit for a couple of weeks.

It was coming up to November and I remembered hearing from someone that had entered them up at the Dwellingup fair that they planted theirs on Melbourne Cup day so I figured around then was as good a time as any other.  We were going away for a few days around then and the weather was supposed to be cool so in they went.  We did have a couple of chooks that kept jumping over the fence into the pen I wanted to grow these things in so I put an old birdcage over 1 and a box and old fridge shelf over the other 2 as protection.

One seed was up when we got home so that was less than a week after it was planted.  Another one took a couple of weeks longer and the third never came up at all.  Eventually they were busting out of their cage and so I had to remove them and let the vines run free. 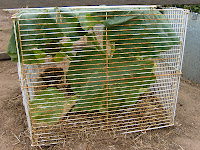 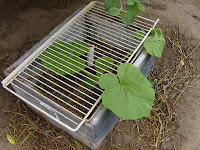 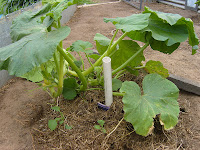 It wasn't too long before there were flowers and little pumpkins. 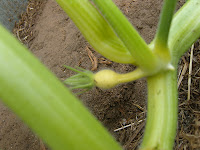 The chooks did get in and scratched around but only one stem ended up with a break and that still grew. 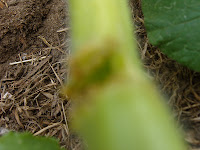 Husband mentioned a couple of weeks ago about how big this one particular pumpkin was getting so I went out this afternoon to get a photo.  He's right, it is quite big. 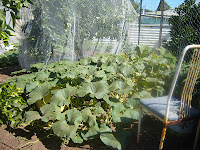 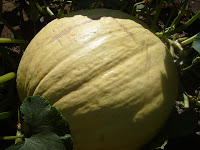 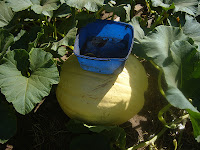 That's a 4litre icecream container sitting on top.
It still has a long way to go before it reaches prize winning size but I am pleased with it.
Posted by Barb. at 6:42 PM