I made soap with the daughter a while ago, she
uses hers for everything but I haven't tried mine yet so can't say what it's like.
With the decluttering that I have been doing I found
a bag of soap-ends in a plastic bag in the bottom of a cupboard, they have been there for quite a few years and I have always intended to melt them down and  mold them into more soap chunks.
Last week I finally made a start.
I chose ends that were a similar light peachy colour, put them in a pot with a bit of water and sat them on the stove to soften.  I added some orange zest, hoping it would add a nice smell. 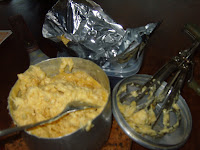 Once it was all soft I used the old beaters to mix it all together then plonked it in a container to set. 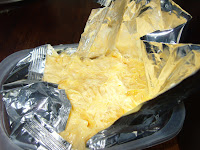 Tipped it out the next day and sliced it.  I think I sliced it too thin though and will cut the next lot thicker. 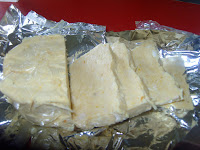 It is now spread out on a tray to dry.  If it looks like it will turn out OK then I will do the rest in a week or two. 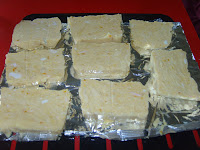 The orange smell is not very strong but the soap looks pretty good.  We will use it but I will also make some more real stuff when I get around to collecting everything I need.
Next time we do a pig I will keep the fat as I'd like to try and make some with that as I think that would be a good use of what we usually just feed to the chooks.  I'd also like to make some with different oils but need to collect the ingredients together first and that might take a while seeing as I hate buying stuff!

I will also use some of the soap scraps to make up some more laundry powder as I know I don't have much left.  I don't use it often but do like to have some on hand for when needed for Hubby's work clothes.
Posted by Barb. at 10:51 PM

Labels: Look What I Made