This morning I was shown some photos.  Of my sons car.  Then I cried.

This afternoon I saw my sons car.  And I cried.  And I heard the story and I cried and hugged him and thanked God that he was alright.


That hole in the windscreen, bottom passenger side corner, that's where a tree branch went through.  It speared through and angled out the back window missing his head by a few inches. 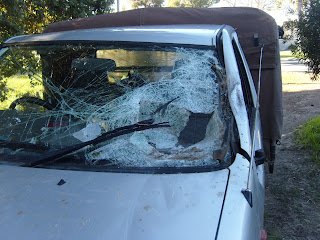 He was on his way home when it happened, not long after he was nearly gored by a wild boar.

I suggested he settle down and stay home where he will be safe.  He says "nah, not gonna happen"

While I was crying, thinking about what could have happened I said something about not even knowing if he was dead out in the bush and we wouldn't even know where to look if he was missing but was reassured by the husband that he would have been found sometime, probably within a few days...

So all is good and apparently I cry and worry for nothing.