But sad for too many others and I cried.

About 5 weeks ago one of the young AussieRocks went and sat on some eggs.  She sat all that day and was still sitting that night and the next day she was still sitting.  My briliant brain and pecked at finger told me that she was probably clucky.  Waste of the eggs she was sitting on though as there is no rooster in with this lot.

I go out the back where there is a rooster with a few hens and over the week I collect 8 or 9 fertile eggs.  I make up a nest in another box, put it in the chicken pen and add the fertile eggs.  I wait until night when all good chooks should be asleep and creep in and slowly get up enough courage to pick her up.  She only tries to peck me a few times while I am carrying her to her new nest.  I shove place her gently in and stand a board up in front so she can't escape.   A day or so later I take the board away so she can come out and eat and poop hoping she'll know to go back and sit.  She didn't so I had to chase her around the pen, finally catch her, get pecked at again, shove her not too gently back in her box and put the board back.  The next day I wire off a little area for her so she can't go awandering.  Over the next 2 weeks she gets out twice and is off the eggs for a few hours before I notice and she is herded back in.  They were due to hatch last Sunday.  The weekend when it rained, and rained, and rained...  On monday I go out to check on her and find her nest under water.  The area she is in is flooded and there is water in the box, where the due to hatch eggs are...
We find 3 dead nearly hatched chickens.   I cried.  I know that the other eggs are probably dead but we empty the nest, put in dry hay, Hubby puts a platform in to lift the box out of the water if it rains again and the chook gets back on the 5 wet and cold eggs we put back in.   I go out on Wed and find and remove a dead hatched chicken.  Not home on Thursday so go out this morning thinking to remove her and clean out the area and put her back in with the other chooks.

She's not there.  There are 3 cold eggs in the nest.  So no chickens from that lot.
I look, find her sitting in a different pen.  Has she or hasn't she a baby under there... 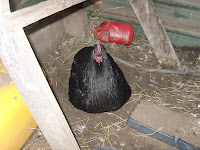 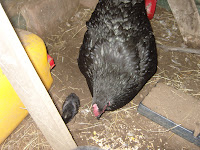 There is one little chicken that survived all the trauma.  It is so cute.   I bet it's a rooster!

A week after the black chook went clucky I put a batch of eggs under one of the Mixed Breed chooks.
Last weekend they too were under water.  They too were put on dry hay and up out of the water.  The MB chook is still sitting on them.  They are due to hatch this weekend. 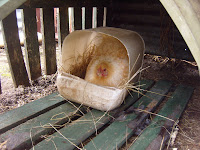 I have put a boad on the pallet under her nest and hay around her with a brick in front so if there is a successful hatch the chickens can get in and out of the nest easily.  Now I need to wait and see.

I felt so bad about the dead chickens because I put the nests there. I didn't even think that the chooks had been scratching the area and that it was lower than the rest of the pen.
Once these chooks are finished with this area Hubby is going to build it up and make a sloping cement platform so it won't happen again.  But bugger!  'Twas a sad day.

I now need to get the black chook and her lone baby back into where she was in the chicken pen.  It is a pen that is netted to keep the crows out whereas the pen she is in now isn't so it's not safe enough for her chicken.  That will be this afternoons job.  I have cleaned out the area and nest so it will be nice and clean for her.
Posted by Barb. at 1:08 PM