Daughter L told me about some markets in Perth that were free.  Apparently people take stuff they don't want and spread it around and people can come and take want they want, for free.  I think that is a really cool idea.
This is a link she sent me but you may have to copy and paste.  http://rrfmperth.blogspot.com/

These markets were on in Perth, WA yesterday afternoon and I wasn't going to go as I had too much to do here, I didn't need more stuff, I was tired, blah, blah, blah...
But thankfully she and her husband talked me into going up on the train with them so I got to do a few more *first time* things. 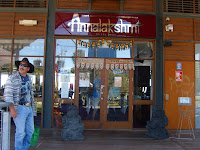 They took me out for lunch at a restaurant that they go to quite often and I have been wanting to try so big bonus there.  The restaurant is down near the Belltower in Perth, on the river, it's called Annalakshmi and serves Indian vegetarian food. We had a plate of this each...:OK, the photo makes it look like a plate of mush but it was very nice, slightly spicy but not too hot for me.  We had a yummy juice to drink as well.


While eating we got to look out over the river.  It was really nice.  Saw lots of boats coming and going, Quite a bit of money in some of them, I bet...
We decided that we'd come again and take the ferry across to the zoo... 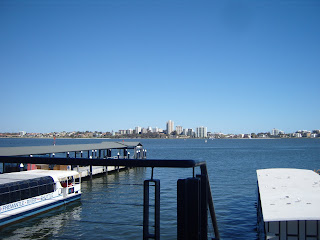 The Really Really Free Markets were held at Hyde Park and after a ride on a couple of CAT buses we made our way there to see what we could score   breath in the ambiance of a giving community.
It wasn't as big or busy as I thought it would be but as it is a newish concept it may take time for the word to spread.  I hope it keeps going and gets bigger and better every time it is held. 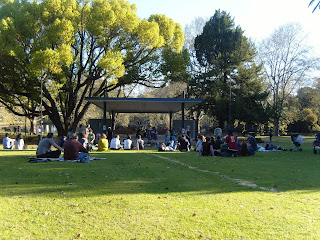 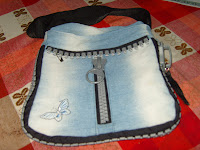 
And a pack of 2, yes 2!! emergency ponchos.  They will go in my bag next winter because I have been caught in the rain with a couple of kids a few times now and it's time I was prepared. 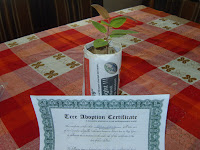 I *adopted* a tree and brought him home with me.  I named him Sunny.  Why? I hear you ask...Well because it was a Sunday, it was a sunny day and I had been given a sprouting Sunflower seed in a pot   If that wasn't the Universe telling me what his name should be then I don't know what it was.  I now need to plant him some place, apparently he's going to be BIG.  Whoops, I just read that he is a Red Gum...Is that a honky nut tree?  Better not let Hubby know....

These markets are on again in December and I hope to see some of you there.
I had a lovely day, thank you L and M for taking this old girl with you.

Oh, another good thing but not a first...Daughter T came out while I was gone and mowed some of my grass for me.  I have some lovely children.  Thanks T.
Posted by Barb. at 8:57 AM