First of June.  Start of DECLUTTER MONTH!  So where to start…Everywhere has stuff that I don’t use but is that a good enough reason for me to get rid of it?  No!! I don’t think it is.  I think that I want some things here just because they make me smile.  And I want to keep some things just because, well, because I want them.
So I will pick an area and work from there.  Todays area will be the kitchen.
There are five *areas* in my kitchen area, one that has already been done.  Today I will pick a cupboard, pull everything out from the top, wipe it over and get it clean then put back ONLY what needs to be in there.  Then do the same with the bottom.  Only when it is clean and organised will I move onto the next one but these aren't big cupboards and I really should get this area done today especially if I turn the computer off ...  But I have started another book, it's sitting on the bench in full view...and there's all the other outside stuff that I also have to get to...it's breakfast time and I want another coffee... 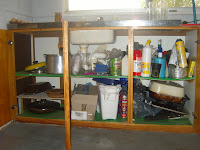 There is the cupboards under the sink...lots in there could go.
There is the one where I keep the dishes, glasses, plastic containers.  Stuff falls out of this when I open the door so that shows that there is too much in there.  Or that there is the right amount but it needs to be better organised. 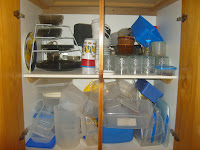 There is the cupboard that has other stuff. 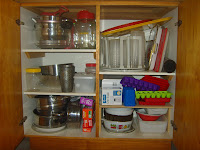 The food cupboard and the cupboard that joins that.  These are where the mouse had been so have already been cleaned and decluttered a bit.  No *before* photo for these, just the after shots.
Five drawers on the end of this.  There was evidence that the mouse had been in a couple of those too.  I have done 2 of these, the cutlery drawer and the drawer that I keep plastic bags in.  I don't buy plastic bags but do keep what I get and reuse. 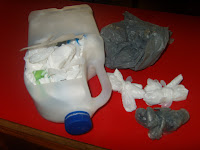 I had seen on UTube where people were folding their plastic bags up, making them small so I tried doing that too.   But I did it in front of Hubby and he made some comments about "losers", "not having anything better to do", "wasting time"  "throwing things away"...so I just scrunched them back up and shoved them back into the overfull drawer and tried to ram it shut.  He laughed, I huffed.  And whinged about having too many bags but not going to throw them out.  Next bag I got I scrunched in down in my hand and tied the handles around it to keep it scrunched.  Took seconds, maybe.  So when he!! was away I pulled all the others out and did the same to them.  Cut a milk bottle open and shoved them all in there.  Now the drawer shuts and he can't laugh at me anymore.
The kitchen area WILL be completed by Friday afternoon and then I will start on the table and TV area.
Posted by Barb. at 9:24 AM