Decluttering The Kitchen and Living Area.

Well I was so sure that I would get all the kitchen cupboards finished on Wednesday but as usual, no, I was sidetracked.  I did tidy the bathroom so we can now walk in there without tripping over things.  And the bedroom has been cleaned.  A bit. Well clothes have been put away and the headboard dusted so it looks a lot better.  A few books have been put in the *to go* box.

I have sooo many things here that I don't use.  But I want to keep them.  Why?  What is the point of having things packed so tight in the cupboard that I couldn't get to it even if I did decide to use it.  There is no point to that.  That's the point!

One example was the coffee plungers.  Packed into Stored in the first cupboard that I cleaned out.   There were 2 in the cupboard in here but so much other stuff was in the same cupboard that I couldn't easily get one out to use.  And then I had to rearrange everything to put it away again.  Which is why it would sit on the bench for a week.  With the jars I pulled out to get to the plunger...No point putting them away 'cause I'd just have to pull them out again to put the plunger back in...Anyway... I picked the best one to keep and I have used it.
The woodfire was going, the kettle was hot, it was easy enough to make.  I just happened to have *real* coffee in the fridge and the fact that it had a best before date of 2005 didn't seem to take away too much of it's flavour.  I heated some milk and frothed it up...A lovely coffee with just a bit more effort than the instant.  So I will try and get in the habit of doing this.  A bonus was that I could leave it sitting on the stove so an hour later when I wanted another one it was still hot.  So no effort needed there. 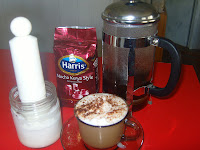 Now that that cupboard has been cleaned out the plunger is easy to get to and so will be just as easy to put away again when I have finished with it and that will make it more likely to be used.
A couple of  weeks ago I was looking for an insulated travel mug that I had in this cupboard.  I *knew* it was in there...somewhere.  I moved some stuff, pulled some things out and moved a few more things.  I must have been wrong, I couldn't find it.   Fast forward to the mouse poo and the cupboard needing to be cleaned out...and there it is.  See, I did know it was in there!  And now I can just reach in and get it when I want it and Hubby can put his back in his car ready for when I need it again.


Sink Cupboard.
This is finished but it took most of Wednesday.  Why so long?  Because I cannot seem to just get in and finish anything.  I go off and do other things, I read a bit. I go outside and talk to the chooks, I check emails, I pull some weeds up and once I pulled everything out and found oil or something had been spilled all over the top shelf and everything on that shelf was sitting in it so that was a real mess I needed a break.  That's my story anyway and i'm sticking to it.
I had a cardboard box in there that I kept some flysprays in and that had fallen to bits so I wasted time in the shed looking for another one.  But some of the shed is clearer!  Once again though not a lot was ditched.  What is in there goes in there.  "Cept for the pig worming medicine which is now out in the shed and
I found a bag of sprouting Garlic and some sprouting Potatoes so they have been put outside to be planted.
But I added some pots that were in one of the other cupboards but this is where I keep pots and pans.  Hmmm... the pots that I added...I don't think I've ever actually used them... But I will... over the winter when the fire is going.
The whole cupboard is clean now and tidier so looks better, not that I am going to stand there and gaze lovingly into it or anything...But if I were to it would be a nice clean cupboard that I was seeing.

It is now Saturday and the daughters came out yesterday to help.  One is understanding of my wanting to cry, the other thinks I'm silly.  But they were going through Grass Roots and Earth Garden magazines!!!!  Of course I'm gonna be sad...even if the only ones going were doubleups.

Eating and Drinking.
How many plates, cups, glasses do 2 people need?  Probably not as many as I have kept.
I did get rid of all the ones that didn't match.  Kept the 10 that do...and the set of 4 that I really really like.  Talked about starting to use them...I use the plastic cups when I have a drink and I use the same one for the whole day but I will keep all the glasses...because I want to.  Some cups and saucers went, I did use a couple of the cups sometimes but have something else that can be used just as well.

We went through the TV cupboard.  That was a bit of a mess but is looking a lot better now.  Half the newspapers went.  I use newspaper for lighting the fire.  Some videos went.  They will go out to Myalup Beach and be kept in the caravan as the TV reception out there isn't much chop.  We put some jigsaws in this cupboard so that gets them out of the way. They were sitting out in the open...on a bucket of Mollasses that needs to be put out in the shed and will be, one day.

The book shelves were tidied up and I did relent and let a lot of garden magazines be put in the box.  That was hard but it has allowed me to clear some others, better ones, from the bedroom where they don't go.

So a big thankyou to L and T.  It is easier with someone else around questioning my wanting to keep something.  Some glasses that I loved have gone but I never used them as I was too worried about breaking them.  And I don't use glasses..L has taken them and she may use them as a vase and have them on display.  They are lovely glasses but way too fragile for me.

I don't have any *space* in the cupboards even though there is lots gone but everything has room to be spread out a bit so it's all easier to get to.

I think there are going to be a few benefits to this decluttering and organising lark.