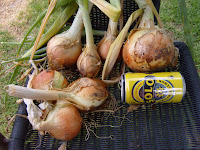 I've been told that I say *onion* differently to the correct way.  Apparently I say *ung-ion.*  It don't matter though how I say the word as long as I can grow the things.  And I can.  I do sometimes leave them in the ground too long but that don't matter either. They still taste good.
I have heaps that need to be pulled up and one day soon I will get to that.
I will plant seeds from last year soon as well.  I think we will always have
*ungion* of some sort growing. 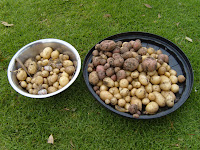 I'm still having problems with Slaters and I have had a few containers of potatoes die off, a result of being eaten by these bleedin' things, so I dug some up.  We ended up with quite a few, not very big but lovely and fresh and yum.


We dug the dirt and mulch out and replanted with some old sprouty ones that came in a crate of  food for the pig.  Sorry pig but I baggsed them first.  We had a spare empty fridge so Hubby brought that around the back and put it near the others and we planted that with spuds as well.  I now have 2 fridges and 5 half 44 gallon drums planted with potatoes.  A couple of boxes and some spots that were empty.  Some newly planted and some still growing.   I think we will always have enough potatoes as I plant any sprouted ones that I get and we always seem to have some growing somewhere.  Even in places that they are not suposed to be.  Some are white normal spuds and some are red skinned ones.  I don't know what they are called just that if they grow they are keepers.
If nothing else grows, as long as these are in the ground we will not starve 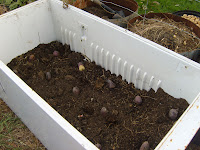 This is one of the fridges, just been replanted with red skinned potatoes.
As they grow I layer them with dirt from the chook pen and grass clippings that the chooks have scratched around in for a few weeks.  The slaters usually end up killing them by eating through the stems before they flower so we don't often get really big potatoes but we don't really mind.  The smaller ones taste good and last long enough in the cupboard.  If we run out and want some we go out and bandicoot a patch, there are always some somewhere.

I have grown potatoes in the ground, hilling them when needed but I prefer to grow them in containers and use mainly mulch type stuff as a covering.  This way they are easier for me to get to when I want them.  By the time I am ready for the potatoes the grass clippings and other mulchy stuff  has usually ended up as nice soil.
Posted by Barb. at 8:58 PM