I have a few Strawberry Guava trees in some of the chookpens.  They were bought for $2 each as small seedlings a few years ago.  They've been growing well but Hubby cut them down a couple of months ago as they were getting too high for the netting over the pens.  They were reshooting and looking good.  Except the one in the pen where I have the older chickens. 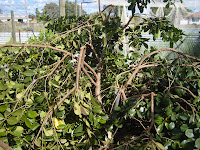 .
I thought that the wind had broken the top branches but I was out there this evening, later than usual and I saw the real branch breakers. 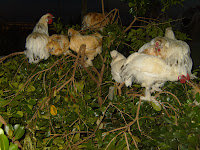 The *chickens* are roosting in this tree and as they are now just about fully grown, and there are 11 of them, the poor tree is breaking under the strain.

Once the 5 roosters are gone and the females are added in with the Mixed Breed chooks  I will cut off the broken bits and give the tree a chance to regrow.  If I'm going to leave the chickens in this pen for so long then I may need to get some proper roosts built.  Maybe it's time to play the nice wifey again.

Labels: Chooks and Chickens. In The Garden