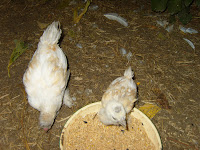 Just over a month ago I saved a chicken from dying by putting it in a box under a light and putting up with it cheeping all night.  This is him.  Or hopefully, her.  It is tiny compared to the one it was hatched with but as it is from the Mixed Breed chooks and some of those are batams I don't know if it is a small chook or a *defective* chook.
It runs around and eats and drinks like its sibling but I would have thought that it would be bigger.  It must be a couple of months old now.  Maybe.
It's a pity I can't remember when they hatched.

I'm pretty sure that they are old enough to put  out in the orchard with the other chooks but because it is so small I'm worried that it will get lost or taken by crows.  I want it out there though as I need to get the pen that they are in cleaned out ready for next time I need it.
It is quite a friendly chicken, a lot friendlier that the other one, so if it is a female I will think about keeping it even though I have decided to get rid of most of that lot of chooks.  Will see what happens.
Posted by Barb. at 1:58 PM