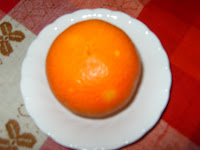 I have been eyeing off this orange for a few weeks now, I *bag'st* (sp?) it ages ago but today I was a bit slow and it fell off into Hubby's hand.  But him being the nice non fruit eater that he is, he says that I can have it.  Isn't that nice of him.  Ha!  There was no way that I was going to let him have it and I was even willing to play the nice wifey card if I needed to but he handed it over before I had to resort to that.  Lucky!
There are 12 more on this tree so if he wants I will let him have one of those. 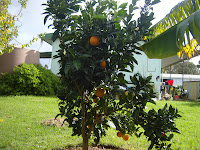 Mind you, we have 3 other trees so he is bound to get a few throughout the season and I must say...there is nothing quite so nice as a just picked homegrown orange.   Taste one and you will not want a store bought one ever again 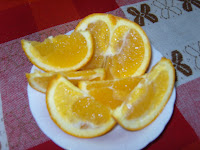