A long time ago I saved some old trellis from going to the tip.  I wanted it because I had/have grand plans to make a wooden bucket to go with the wishing well I was/am going to build.  Eventually, after 6-8 months husband got sick of asking me to do something with it and pulled it apart and stored what he thought I might need in the back of the shed.  The bits he thought I wouldn't need he put in the bin.  But!  I saw them there and pulled them out.  After-all, they were good for something.  Surely.

I hid put them away in the shed until I could think of a use.  'Cause they had a use.  Surely.

Eventually, after another month or so, I thought I'd make some signs for the garden out of them.  I'd just cut them to length, cut a pointy bit on one end of the longer piece, nail the short bit to the long bit and write the name of the plant on it.  Easy.

I cut them easy enough.  The third saw I tried worked best and I soon had 4 bits of wood cut and ready to put together.  But it was rough and I was concerned about splinters so went to get sandpaper.  Couldn't find it, inside to ask husband where it might be, back out for another look...Why stuff can't be put away after use I'll never know.  So rub rub rub, give up because it was hurting my hands and then a break of a couple of days because I forgot I was doing it.

Eventually get back into it and I soon have 3 signs ready to write on.   Ummm, with what do I write with dear Henry...I had a doctors appointment over in Pinjarra so afterwards went to Mitre 10 to buy *something*   I didn't know what I wanted but knew I wanted to burn the words into the wood and after explaining myself not too clearly they decided that I needed a wood engraver and they didn't sell them.  Swearword!   I needed something though or they would never get finished.  I spied a thing that looked interesting, it carved wood and glass and ceramics...I could have fun with that.  But it was over $100 and I decided not to spend that much.   Home and more thinking.

Yesterday husband is home, just for 1 day before he goes back to work and with nothing planned he is at a bit of a loose end.   He asks about my signs and I tell him about how I can't do much before I give up, how I didn't know what to use to write on them with now that I didn't have anything that would burn the letters in.  He says they used to use wire, bend it over and heat it up and write.  Heat, write, heat, write...He finds a pointy ended tool and shows me what he means.  We make a GARLIC sign.    The board is light timber and the burnt in letters are thin and black.  It looks OK.

But he had to go into town so he would go to the hardware shop and see if they had what I think I wanted as it would be quicker.

He comes home, I am busy with other things but soon I go into the shed where he is and he is working on my signs.  He is carving into the wood with the thing that I didn't buy because I thought it was too expensive.  He didn't think it was too expensive even though the one he bought in our town cost more than the one I didn't buy in Pinjarra.   Hmmm.   I should just buy things because at least I give some thought to how much they cost and look in bigger shops that are lower priced than our town ones.  This is the tool that he bought.  It did the job and will be used for other projects so I wont whinge too much about how much he paid. 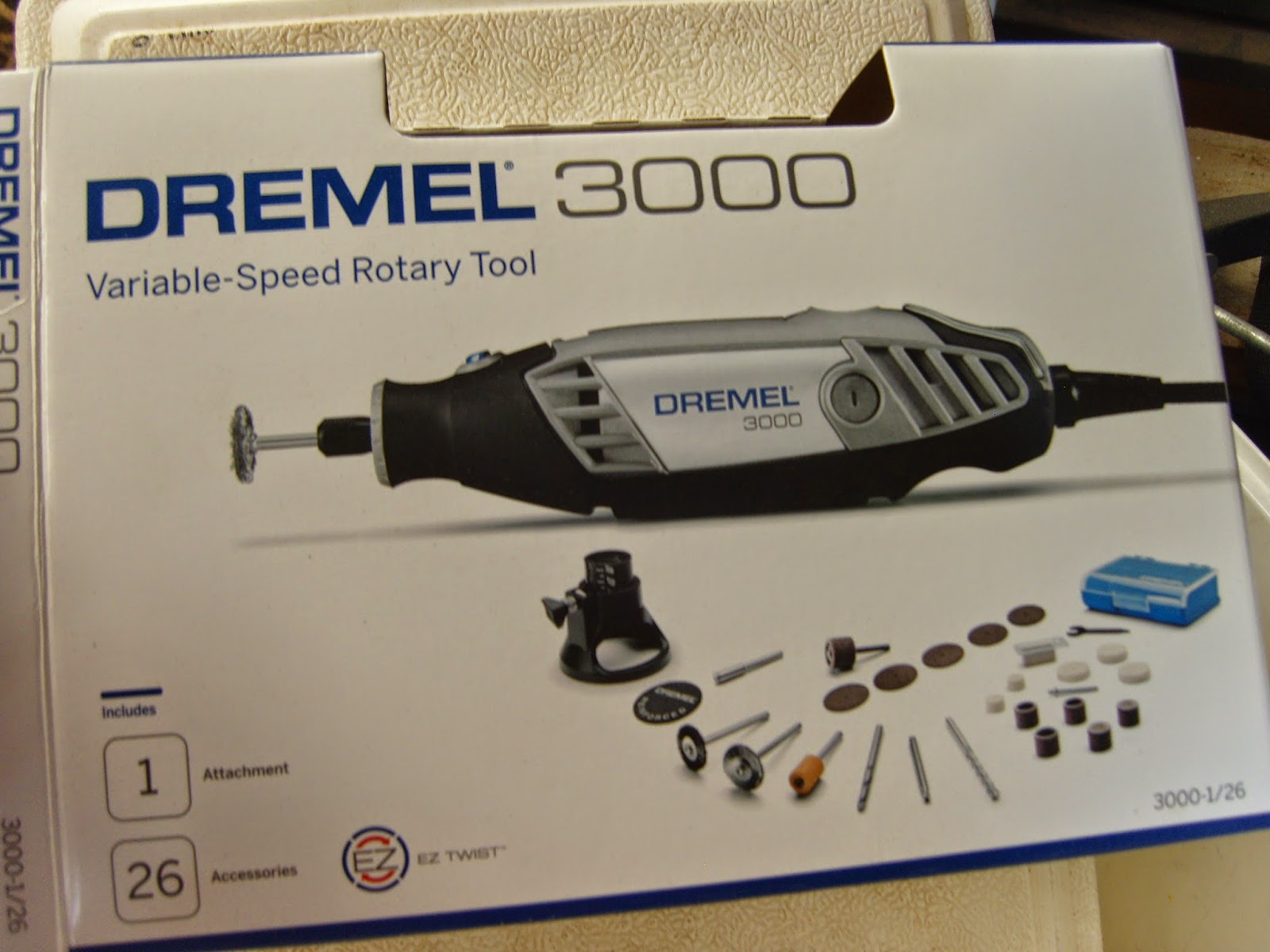 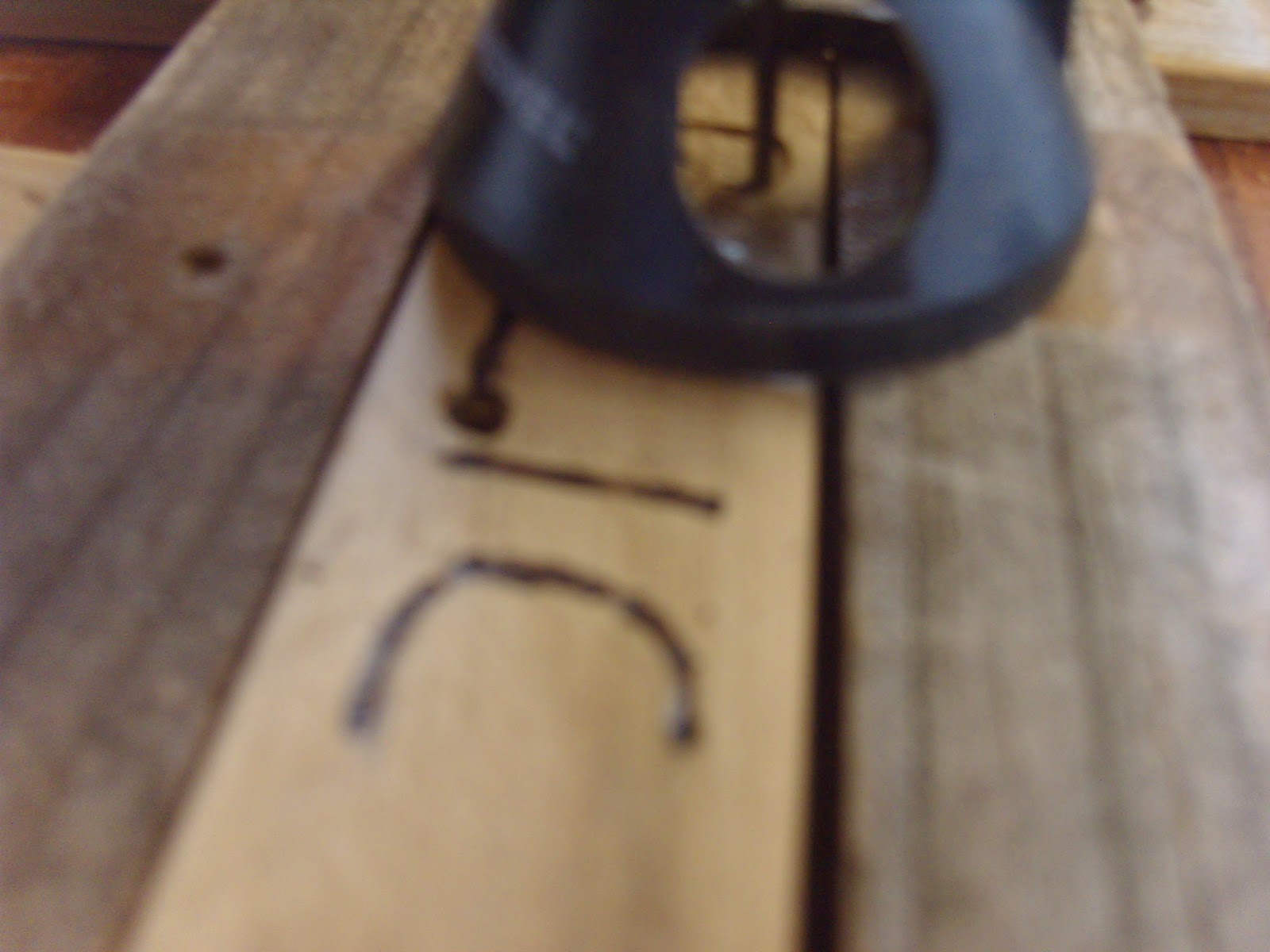 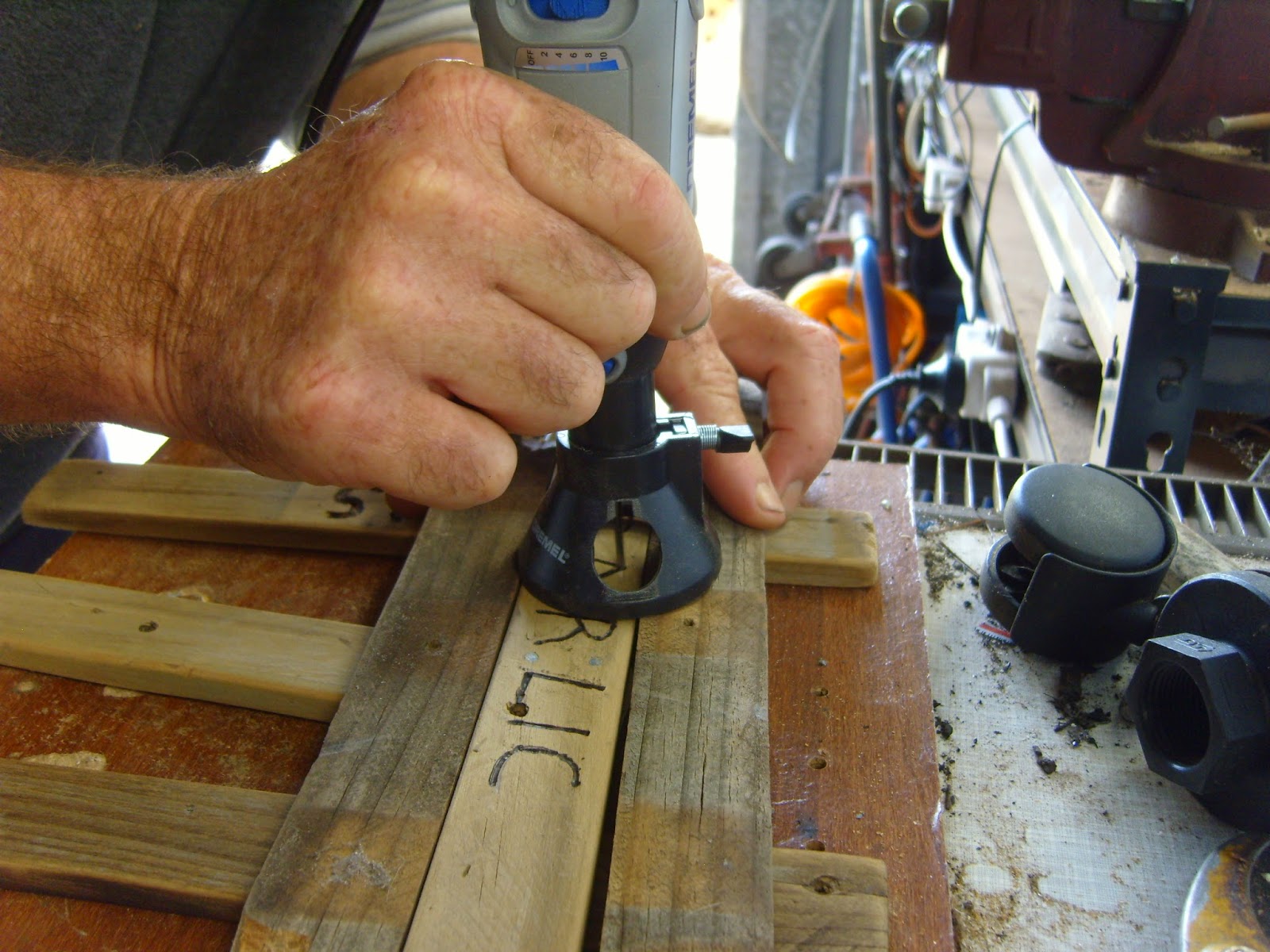 Here he is showing me how to hold it, we have to write freehand and his letters are much neater than mine so I let him do most of the writing.  He ends up going over the GARLIC sign. makes the letters thicker and deeper in the wood. 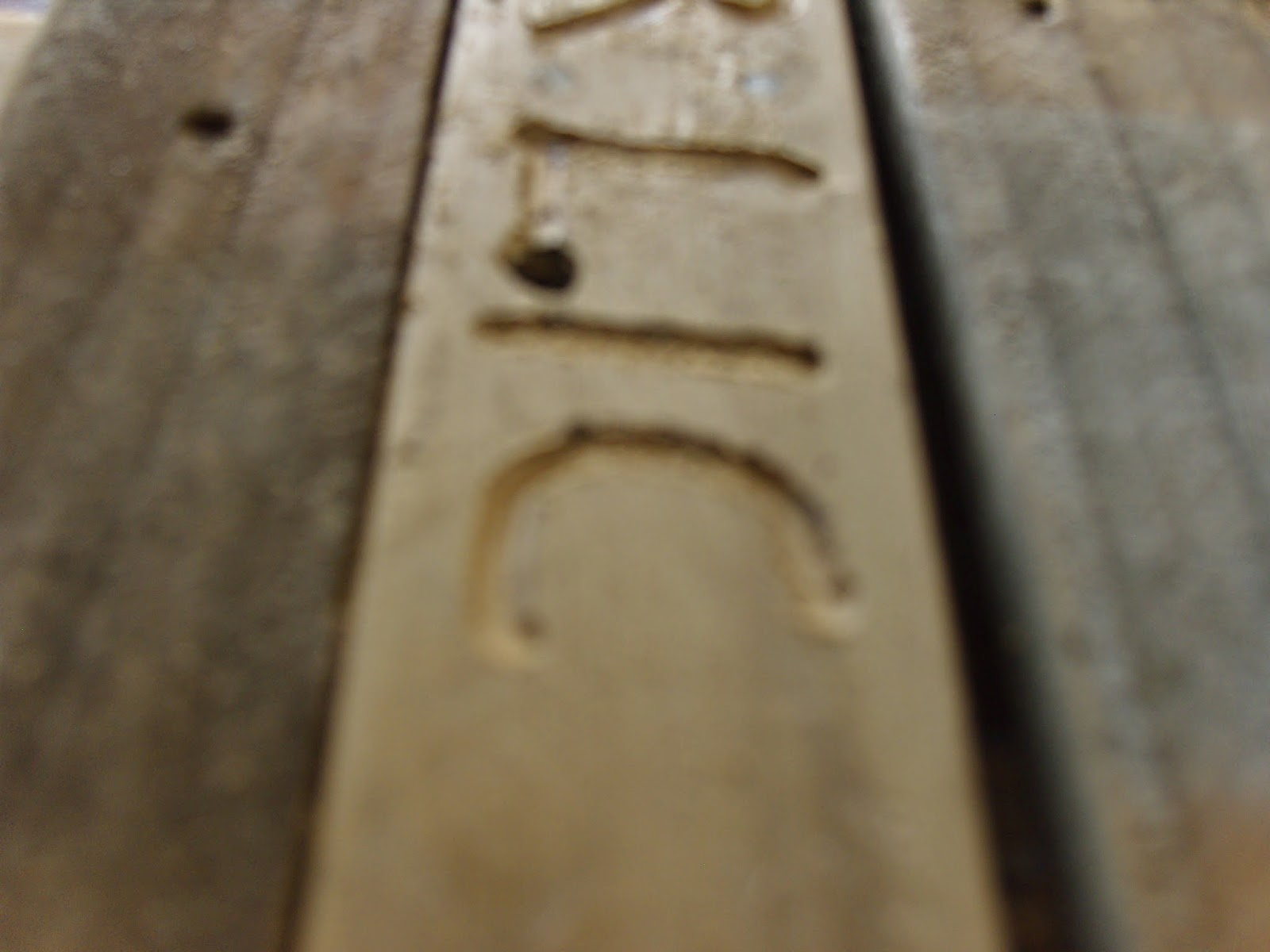 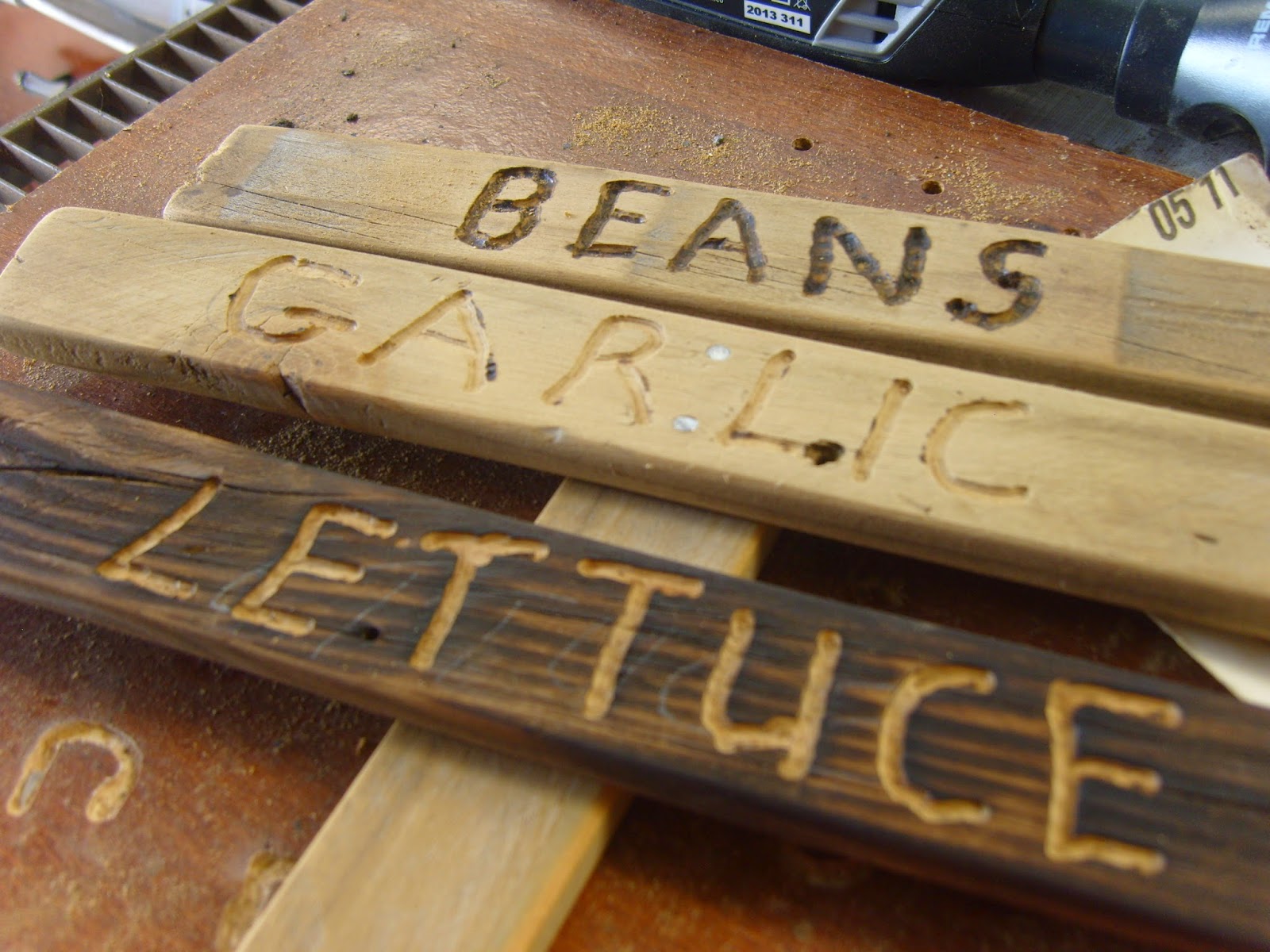 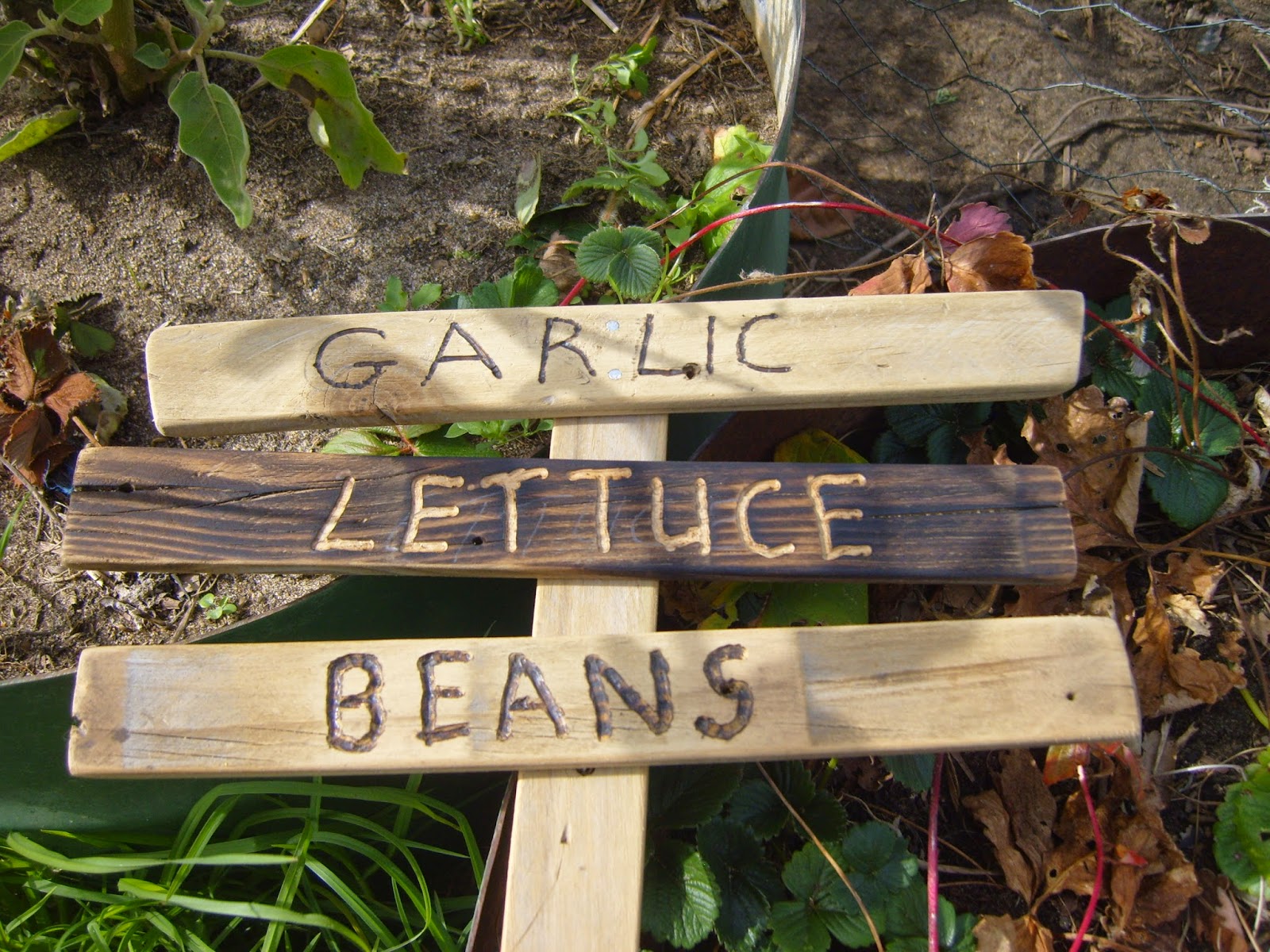 We make a few more, trying different things to see which way I like best.  Some are just carved, some are carved then burned.  I decide that I like the letters lighter and the wood burned so we change the ones that aren't that way. 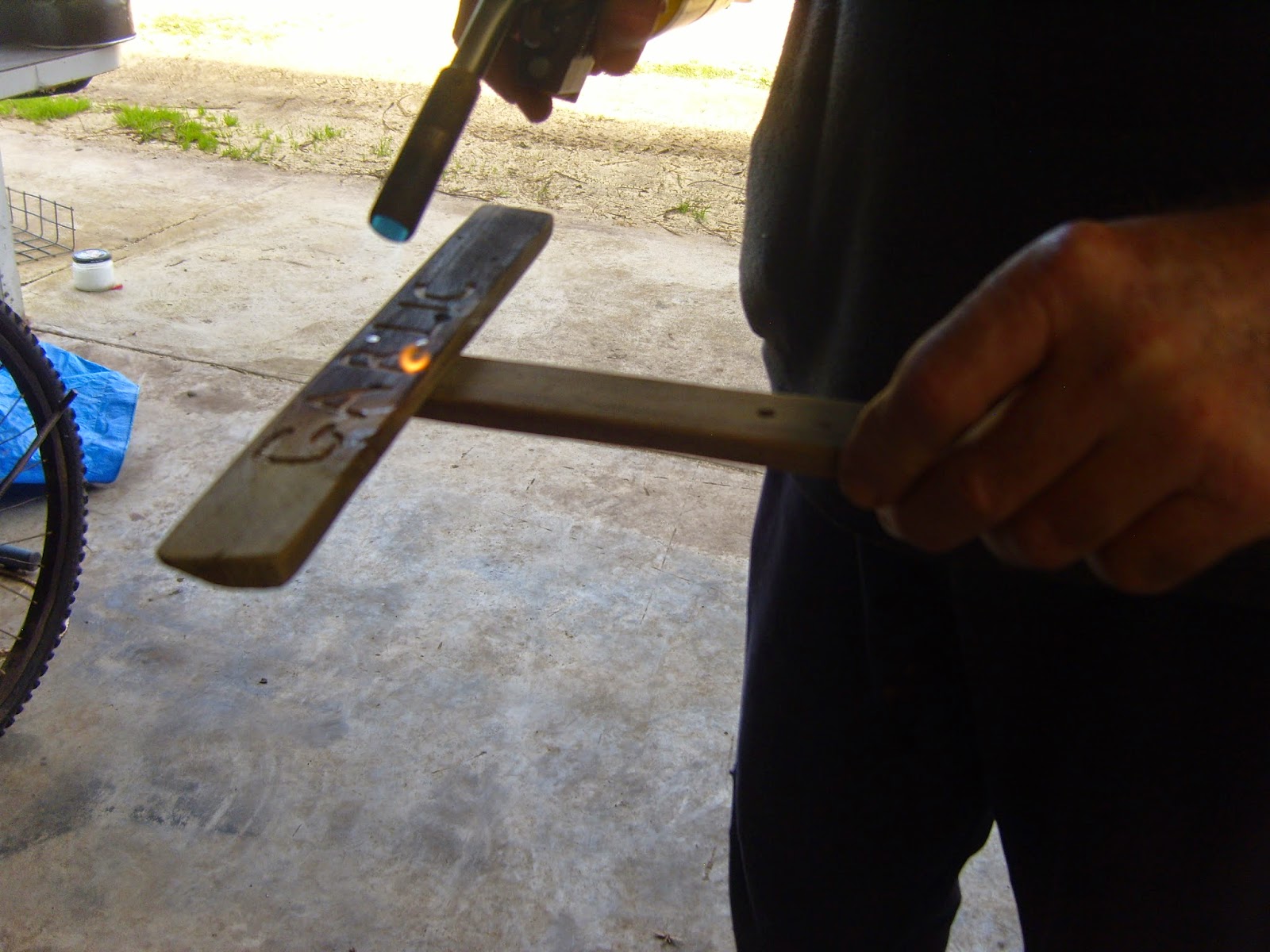 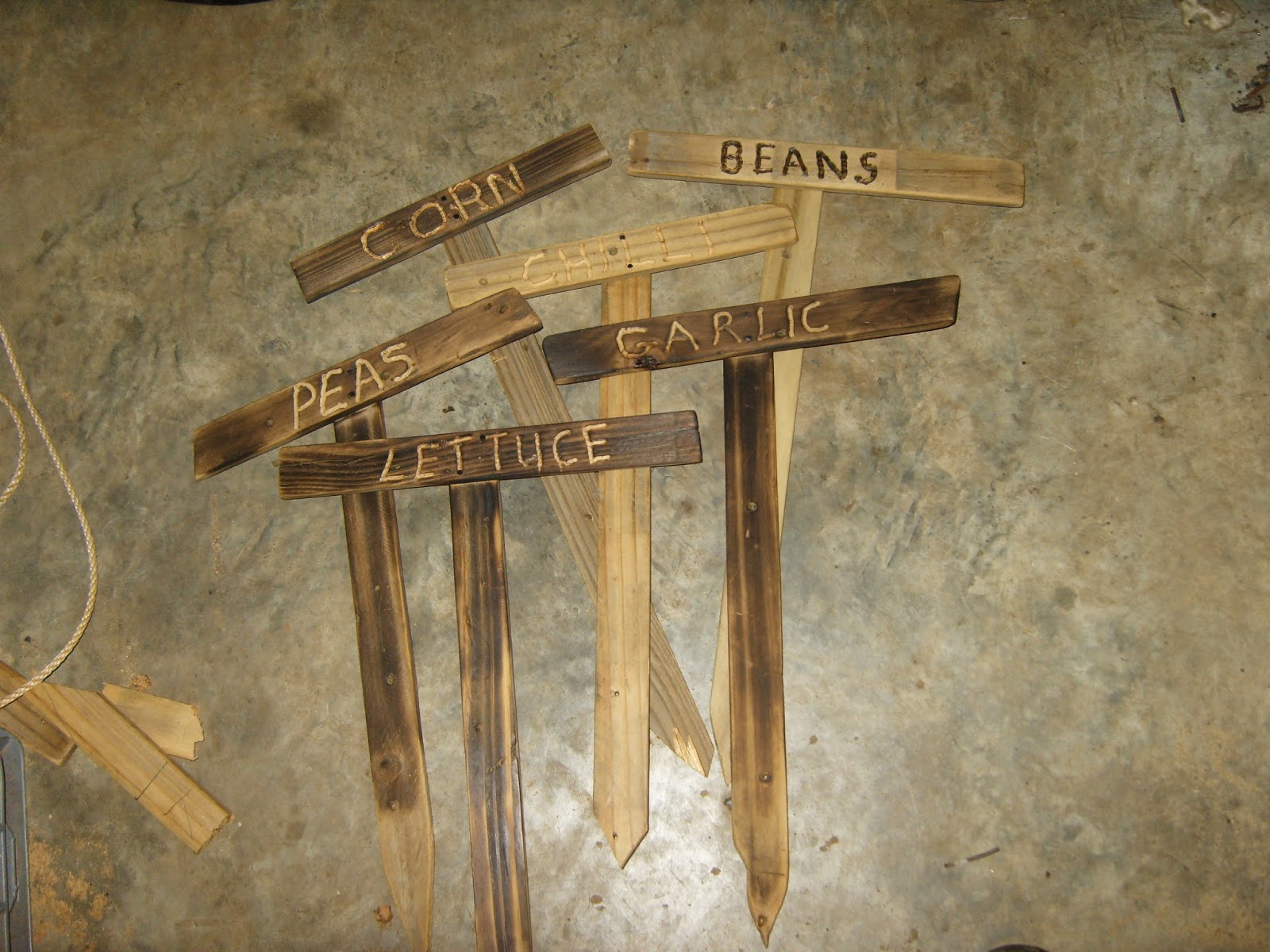 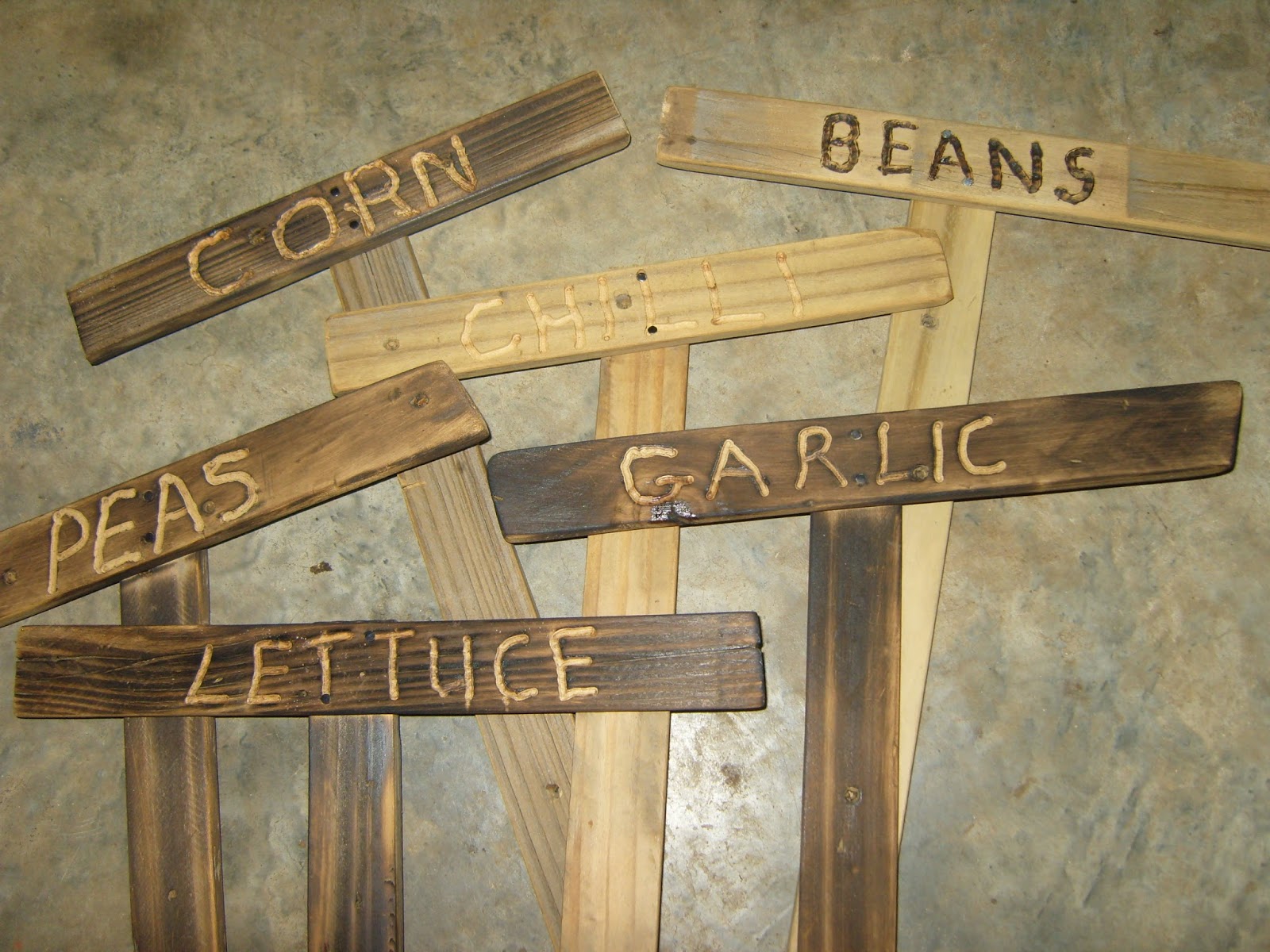 And despite my whinging about husbands buying expensive tools him doing that and his teaching allowed me to make the sign to put up with the tree I planted for the granddaughter.  You can see that it isn't very neat and all the words I wanted on there couldn't fit due to my sizing but I like the rusticness of it.  I may have to seal it, and the others, but I think they look OK.  I like them. 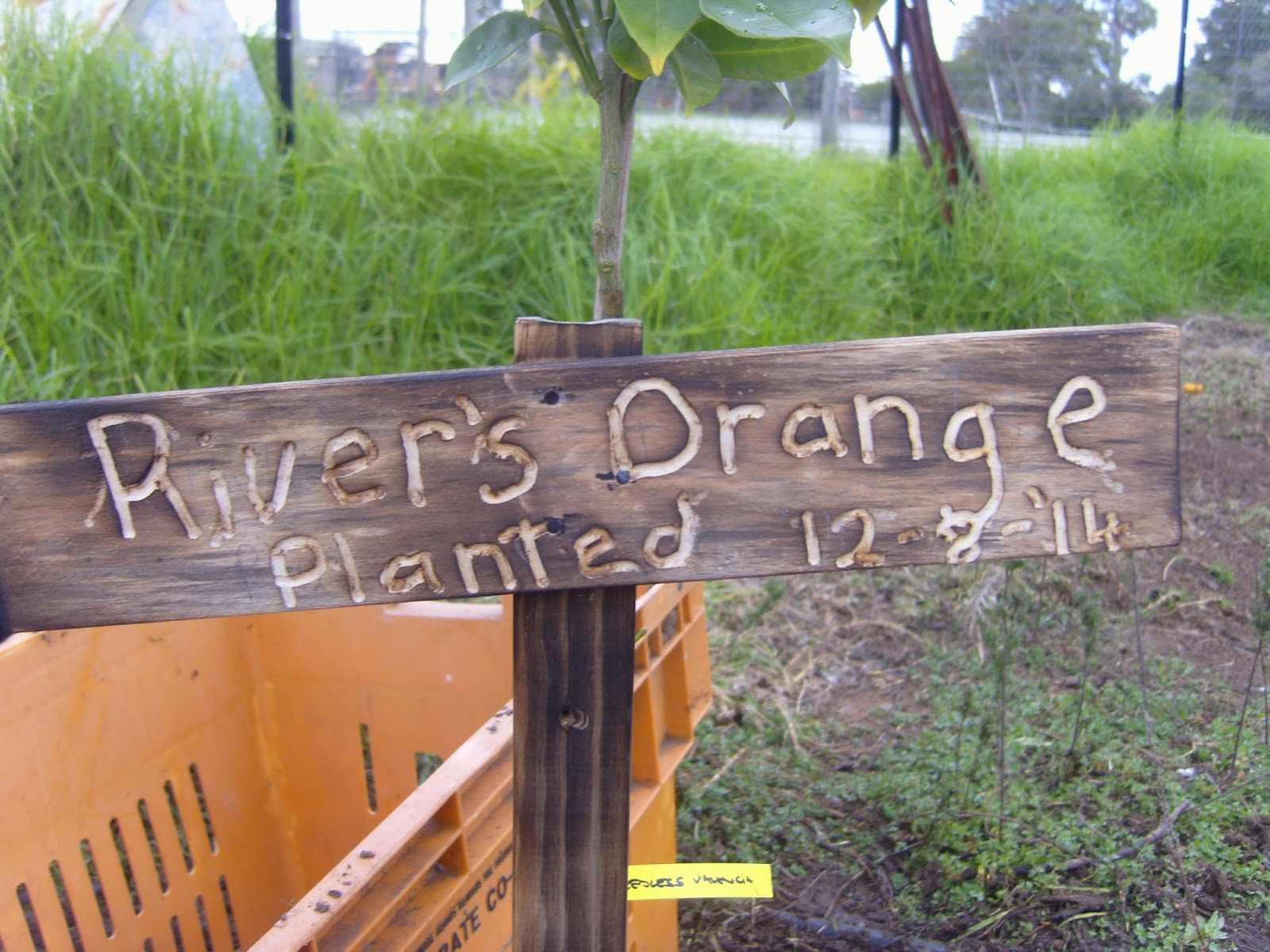 So I now have the skills to make as many signs as I want.   When I want.  It wont happen this week but when I'm ready, there could be a sign for everything.  Eventually they may look good enough to sell on our market stall.  That in itself is a good reason to make lots more as I'm sure the more I make the better I will get at it.  And faster too, at the moment it takes me a long time to make one but with more signs being made I am sure to get quicker, neater, faster, stronger...

Do you have signs in your garden?  Tell me why.  Is it to identify the plants?  Point the way to somewhere?  Housename?