When we were kids we used to wander the hills in the town we lived and go mushrooming.   Not many places have mushrooms growing now and you can't just go wandering over other peoples paddocks even if you do see mushies growing there.  That wouldn't be right.  Of course you can buy them but I don't.

So every year now I look forward to the sunshine after the first rains.  It means that there will be some mushrooms coming up in our paddocks.  If we get to them before the cows then we get a few feeds of fresh field mushies.  We have them come up in 3 areas that I know of but one paddock I wont pick from as I am not 100% sure on if they are the right type.  The ones in the triangle paddock look and smell just like real mushies.  When left sitting on a piece of paper the spores are dark.  BUT, when young the underside of these is white.  They go brown as they age and get bigger but to me the underside should be pink when small then darker/brown.  So I wont eat the ones from the triangle paddock.   I will eat them from the other 2 patches, no worries, have done for the last 5 years or so and am not dead yet so I figure I am right and they are the right ones.    We picked a batch a month or so ago and thought they were finished but with the latest batch of rain and sunshine Husband found a couple more and I had them a couple of nights ago.

A few weeks ago I mowed out the front of our place, we have been away for a week and getting home saw that it all needs mowing out there again.  I was walking out there a couple of days after we were home and noticed a big white ball growing, thought it was a big puffball and as I had read that you can eat those when picked at the right time I squatted down next to this one to wonder why you would.  Ha, not a puffball.  Big toadstool?  Didn't think so.  I was pretty sure it was a mushroom so left it there and we went back for another look a couple of days later.  I got down and smelt it and it smelt like a mushroom.   Husband got down  on the ground and the first time he looked it wasn't open yet but the next day he saw that it was pink underneath.  Looks like we have our first BIG mushroom.

Manymanymany years ago we used to sometimes find big mushrooms, what we called horse mushrooms.  I'm not sure though if this is right as the underside is pink and some stuff that I have read says that Horse Mushrooms start off white...maybe the triangle paddock mushrooms are real Horse Mushrooms even though they are not big like I think of a HM?

Anyway, we kept an eye on the mushroom, watched it open as it grew and I put a bit of white paper underneath to see that the spores were brown and not yellow.   And I covered it over with some grass and small branches from the trees out there, to hide it from any mushroom stealing people that might pass by though technically, as it is/was on public land it wouldn't have been stealing... 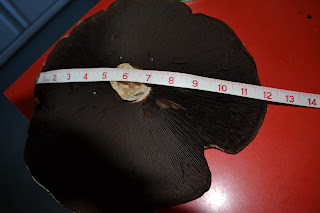 The mushroom has been picked and is in the fridge...I now need to decide how to use it but it is big enough to try a few different ways.

Do you pick real mushrooms from your paddocks?  Get big ones like this?  Know what they are called?  All comments appreciated, thankyou.