Maybe not technically mine, the hive had been given to me but the honey was from the 3-4 years prior to my getting it.  But, my hive, my honey!  I'm going with that.
The honey was very dark and not sure what it is from but a mix of everything that has blossomed over the last few years I suppose.  It tastes OK.
When I first saw it I thought by the dark colour that it might be Jarrah and it probably has some in there but it's not as strong flavoured as the pure Jarrah that is my favorite.
I ended up with 5kilo of this honey.  The bigger bucket was given to the bloke that gave me the hive and he will get a few more as he asks for it.  The deal was he gives me the hive and I give him half the honey that was in there but we will give him what he wants until he moves away.

This first honey was extracted by carefully scraping the frames, they were not in good condition, draining out as much honey as would come then crushing everything and straining it through a strainer and some netting over a bucket.


This was then strained again into another bucket. 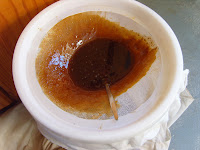 All too hard and time consumer according to husband so the next lot will be extracted using the new extractor that he bought for me.