I'm pretty sure that I have rendered down fat before, albeit 30 odd years ago but I didn't think it was hard to do.  I even read up about the process in case I had forgotten and most of it sounded like what I would do.  And we all know how much fat comes from cooking bacon...(I'm going to start keeping that now too)

The plan was to use the gas stove that we use when camping and do it on a table outside.  I was going to put all the fat in a pot, add a bit of water and boil it away.  When it cools the clean fat would rise to the top and the gungy water would be added to the chookfood.  Easy!  Hmmm,

Apparently I am too tight even for that.  I knew we didn't have much gas left and I felt bad about having it on for what could be hours so I rethunked it all.  I would light the wood fire and do it inside on that.  Yesterday was quite a warm day though but I thought if I waited until evening it would be OK to have the fire going.  So that's what I did.  Lit the fire, put the fat in a pot on top, added water, let it boil.


It was on the stove for a few hours but by the time I was ready for bed it didn't look like it had melted much but I strained it out into another pot and left it sitting on the bench overnight. 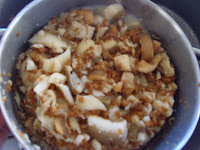 This morning it looked like this.  The fat pieces that are supposed to shrink down and become crispy were soggy pieces of pig fat.  Not good.  I took some of the fat out of the big pot and put it into the electric frypan.  It is sizzling away and I can see that the fat is coming out and pooling in the pan.  I'll give it a bit longer before I decide whether to light the fire or suck up the electricity use and keep it in the pan. 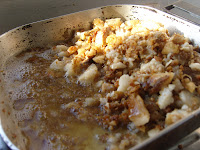 I did light the fire but I have done a few lots in the frypan where it has melted down quite well and I have been able to pour off the of liquid fat.  I put that fat into a pot , added a small amount of water and set it on the stove.  Brung it to the boil and it is now cooling.
One pot of liquid is in the fridge and I will see how much solid Lard I get from that once it sets.  There isn't enough room to put the other pot in yet but I will do so when I shift stuff in there around a bit and make a space for the bigger pot. 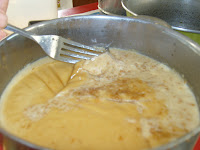 I think this is starting to look the way it is supossed to.

Lard can be bought, already rendered down and ready to go but for me that defeats the purpose.  I want to use more of the animals that we grow to eat and using the fat for soap making  makes sense.  And I don't want to have o buy oils or fats for soapmaking.  We don't fry much here so don't use much oil but I do buy a bottle now and then and it is used but if I can keep a supply of Lard in the fridge or freezer I wont have to buy oil anymore.  Another step to buying less.  Some people make their own lye but if I decide to keep making soap I will buy the caustic soda.

I know a nice butcher and he says he can get me lots of fat if I want it.  Come Winter time when the fire will be going all the time I will take him up on that offer and do lots of rendering then.  Some Lard will be able to be frozefor the oil replacement but I will also be able to make lots of soap as well.
Posted by Barb. at 10:14 AM

Labels: Challenges. Stuff To Do.