After making an easyish job of turning pig fat into lard into a bit of an adventure I was ready to add the lye mix and get that mix aturning into soap.

The recipe that I ended up using was simply lard, water, caustic soda, and because I had been told by a couple of people that lard only soap wouldn't work I thought that this small batch would be a good test to show me if it was worth doing a big batch.  I think it would be but I am going to make a few more small batches and add different *stuff* and find a really nice smelling one.  This lot smells like soap!  It looks like soap too but it will be awhile before I can see what it washes like.

Yesterday we went to some markets and there were three different shops with soaps in them.  Most of the soaps were coloured and scented but in the first one only 2 soaps smelt nice to me.  One smelt and looked like chocolate.  So nice!  The other one I liked was a green mint smelling one.  Lovely!  Husband liked an Orange one but to me that one smelt like soap.   I wanted a coconut one but none of the three coconut scented soaps smelt like coconut to me.   I have coconut essence here though...And an idea...
The second minted soap wasn't very minty but there was an orange coloured one that to me smelled citrussy but not like an orange.  It will be fun trying different things to try and get a nice smell that is subtle and not overpoweringly stinky.

Once I was ready to make my soap I realised that I didn't have anything small enough to use as a mold.  I was going to use an aluminium can but read that that wasn't a good idea and finally settled on a box from some biscuits.  That is maybe a fraction too big and I will find something else to use before my next lot.

See below.  I did all the right things and had the gloves and eye goggles ready.  To be honest I don't think I'll wear the goggles again...I might but they were a bother and because I wear glasses they were not comfortable and I had to keep adjusting them.  The gloves were OK and may get used again. 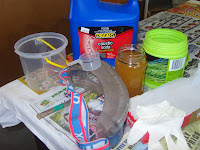 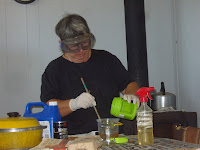 See, I even had the spray bottle of Vinegar close by in case I did splash some caustic on myself.  I admit I should have had long sleeves on too. 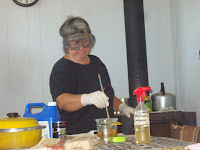 And I need a better stirring thingo.  Here I used a dried grapevine cutting and bits came off as I stirred.  I will get a better stick or find an old wooden spoon somewhere. 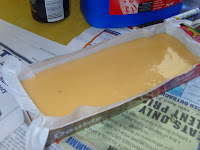 It mixed and poured easily into the bicky box. 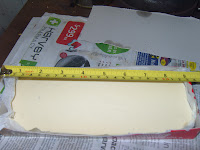 Not the prettiest soap but it looks and smells like soap and is now away waiting until some time has passed and I try it out. 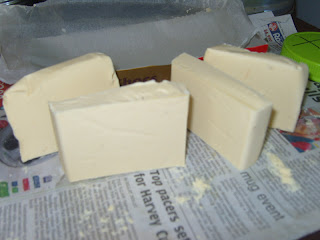 And there you have it.  My way of making soap, with pure, natural ingredients.   A lot of people nowadays like their soap made with oils, maybe they see that as being more natural.  I want to use the fat from the animals that we kill and eat but one day I will try and clean some old oil and see how that goes.  I will probably not go out and buy different oils and stuff to mix up anything special.  We don't use a lot of soap here, I think a good rub with a flannel will usually get you just as clean but we do use it so I will make some more.
Posted by Barb. at 8:04 AM