Hubby is supposed to be working away but last night as I was coming home I passed him at the turnoff in Coolup.  I wondered what he was up to and as he caught up with me and followed me I thought that he was finishing early.  He had someone in the car with him.  I turn at our corner but he keeps going.    So not coming home.
So I am home, expecting the dog to be dropped off so I am trying the get the chickens fed and watered.  Checking on a sick chook when Friend with dog gets here. Hubby pulls up right after her.
We get the dog and his gear unloaded and Friend asked me if I have heard the new plans.  No, says I.
Dinners at our place, she says.  So that explains why Hubby and workmate are here.

A similar thing happened last week when the Friend rang with an invite for me to join them for tea as the workers were going to be there.

I really need to clean and keep clean this house as the workmate needed a shower and I had 2 minutes to tidy before he needed access to the inside.  Big sigh, but why worry, nothing I could do then and I haven't done it now so...

Back to tea.   These people live up a windy, steep, covered in kangaroos road, Hubby knows that I don't like driving up there by myself so the lovely man came here first to pick me up.

As we got there we could see some roos under their clothesline.  Some more just up a bit and still more to the left... 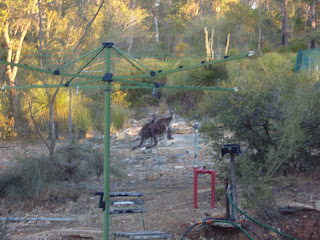 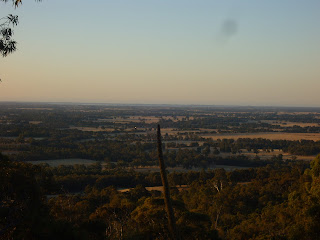 The views from this place are amazing.
Even more so when looking through $2000 binoculars!!  I so want some.  Not gonna happen anytime soon though.

This photo is looking westward toward the Estuary.  Use the binoculars and I could count the cows that were miles away.  (there were 18 in one paddock and 22 in another) 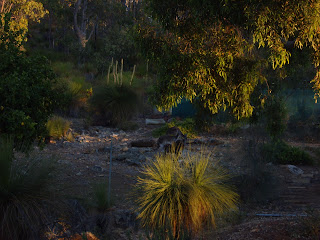 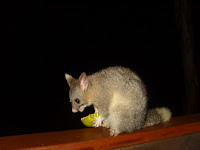 They also have a Brushtail Possum that comes out at night, sometimes they give it a bit of apple.
It was there last week and came again last night while we were all eating out on the deck.
It is so cute. It is quite friendly in that it will let you touch it, so soft.

I'm not sure how this women does it but she can get a decent meal on the table for 5 extra people with a half hours notice.  Admittedly last night he cooked the meat on the barby but she prepared a salad and some chicken and garlic bread to go with it.  And they were leaving for their trip away at 6 this morning so she had to get everything cleaned up after we left.  I did try to get the blokes to hang around and help but they also had an early start the next day and a 30min drive back to their camp.  After dropping me off here first.
I have things so easy.
Last week she had everything ready and she'd only been home for 20minutes before she knew they were having people there in a half hours time.  Who does that!  Not me, that's for sure.  I wouldn't even know where to begin.
When I think about it, I know a few people that could probably do that so maybe it is just me. lol.
Amazing lady and so nice.  They are both lovely people and I hope she will become a good friend.
Posted by Barb. at 7:33 PM