About a month ago I noticed that one of our old Isa Brown chooks kept sitting on a nest of eggs.  I'd lift her off but she'd get back on again.  I had read or been told that Isas don't go clucky but I was pretty sure that this one was.   I wondered if it was worth the risk of putting eggs under her or not and decided that it was.so I swapped her Isa eggs for 6 eggs from my *AussieRocks*
I had 2 Mixed Breed chooks go clucky around the same time so we put 6 eggs each under them as well.

End result?  I have more chickens.  They hatched sometime Sunday night or Monday and they are so cute.  More members of my *AussieRock* flock.
The Isa mum is calm and friendly and doesn't seem to mind too much when I pick up her chicks.  She has 5.  This morning I shifted her from the nest in the Isa pen and put her and her chicks into a netted pen.  She looks like she has settled in OK.


The other 2 chooks hatched out 9 chickens and they are both being Mum.  These chooks are not friendly and go psycho if you try and pick up any of their babies.  I know because we had to this afternoon when I couldn't find one of the mothers.  I heard a chick chirping and went out to check them and found one out of it's pen.  Went to put it back in and only saw one chook.  Looked everywhere and it wasn't there.  Called Hubby to help me look as it had to be somewhere but it wasn't.  In the end we lifted the chook that was there to count the chickens and the other mother was under her.  I think maybe it might have suffocated if we didn't find it.  They were huddled in a corner so we moved them out and into a bigger nest where they and their babies fit better but they still squash in together.  I'm hoping they all survive the night and I will check on them early tomorrow. 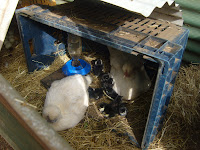 This is the 2 mums and the 9 chickens out of the nest where they hatched and sitting in a crate I had the food and water in.  I cleaned out the nest but they wouldn't go back to it.  I fixed up another one at the other end of this chicken enclosure.

I will post more photos later.
Posted by Barb. at 9:50 PM