The husband is shifting bees this week which basically means a lot of driving and not much sleep.  I was thinking Friday night as I was going to bed how lucky I was as he still had 3 hours driving ahead of him.

He left here at just before 9.30am Friday, drove to Perth, did work stuff there, drove the truck up to some bush area near Lancelin and did work related stuff up there until it cooled down enough to load the hives onto the truck.  Waited quite a while until the bees settled, drove back to their camp to pick up the water trailer.  That took 3/4 hour to drive 6km.  Drove back this way and stopped here at 10.30pm to fill the water trailer and then continued on down to the Nannup area.
Arrived there at 1.30am, where he slept for a couple of hours in the truck.  Then at daybreak, before the bees start flying he needed to unload the hives and get them set up.  Set up the water tanks and other stuff, home here just after 1pm.
So it's non-stop from 9am, until 1.30am...sleep...then working again from daylight until 2pm.
There is no way that I could do anything for a fraction of that time and I appreciate the hard work he does so that I can stay home and not have to work.  Thanks Babe. 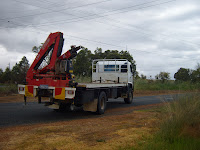 This is him taking off at 8am this morning for more of the same.  He'll be home tomorrow afternoon and then off again for another load on Tuesday.


According to "whereis" Lancilin to Nannup is around 4 hours drive in a car but travelling in a truck loaded with bees it takes nearly twice that long.    We are somewhere in the middle.