It's Autumn and I would have thought that all the snakes were off sleeping somewhere but no, we still have to be careful of them.

One of the daughters lives in a house with a big yard and a fenced area with an old swimming pool in it.  The liner of the pool is ripped so the pool is not used.  It seems the area has become the home for a few Dugite snakes.  A son in law catches these snakes and they are relocated to bush a few kilometres away. 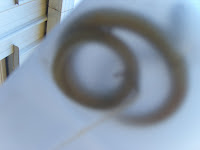 Yesterday he caught this baby one and put it in an empty milk bottle ready to be trasported elsewhere.

He is an American so don't know if that has anything to do with it but no Aussie blokes that I know would do this. 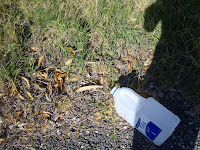 She found skins from bigger snakes as well but not the big snake itself.

Not sure how to rid the area of them all and ensure none come back though.  The yard backs onto a railway reserve and we have always had the occasional snakepass through there but with big ones and babies in this same area it seems like there may be a few living there. 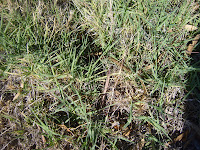 If you click on the photos they become bigger and you can see the snake poking it's head out of the bottle and then moving away through the grass.
Posted by Barb. at 1:38 PM