Breakfast In The Garden. 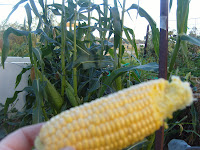 I spent most of yesterday morning outside in the gardern.
Had this for breakfast while out there.

We have enough corn still growing to get us through April.


Something has eaten all the Chinese Cabbage, from bought seedlings though. and a couple of cabbage seedling, also bought, have disapeared.  I have put 2 other lots in from seeds I grew here so hopfully they will survive.  They are in the drums out the front so a different area from the others.  I will get more seeds in this week as more didn't come up than did. 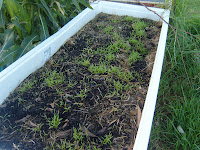 Finally got some carrots to poke their heads up out of the ground so put in another lot yesterday. Hopefully they'll do the same.
This lot came from seeds we collected  last year. 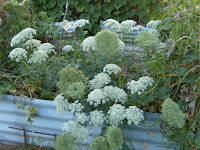 The seeds that haven't come up were planted from bought seeds but the weather was also hotter.  This lot were covered with an old flywire screen with dried grass and weeds dumped on top.  The lots that didn't grow have also been covered though with different stuff.  One with cardboard, one with hessian...
Posted by Barb. at 9:53 AM