We have been away for a couple of days, a quick trip up to Jurien Bay, north of Perth, WA.  We needed to buy a couple of big bags of fishfood and BinL needed a couple as well and this was the cheapest place that we could find and as we had a car full of *free* diesol it was cheaper to drive up there than have them send it down to us.
We were going to camp but things changed and Hubby booked us a motel room for Thursday night.

We left here around 10am Thursday, later than we planned and needed a couple of stops on the way, one at Gingers to buy lunch and another here at Cataby because I needed to. 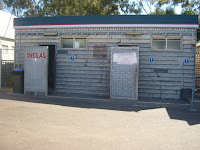 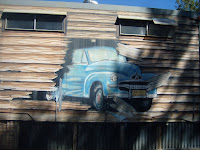 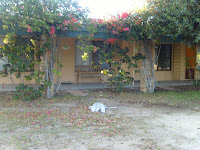 Because of the stops  we didn't get to Jurien until around 3pm. but found the place where we were to pick the fishfood up from easily enough then went looking for the motel.  Found that, checked-in, had a coffee then went exploring. 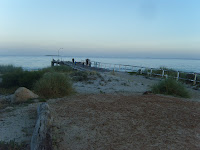 Early morning photo of a jetty a minutes walk from where we stayed.  There are quite a few people fishing and after we walked out for a look we saw one bloke pull in a squid.


We left Jurien by 7am Good Friday, hoping that the roads wouldn't be  too busy on the way Stockgully National Park.  I wanted to see the caves here and as we were in the area... 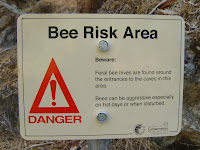 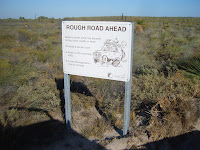 A couple of signs had me a bit worried but Hubby was THE MAN so all was well.  And the road wasn't rough and feral bees won't bother you unless you bother them so I sooked for nothing really.  Oh well, what can I say, I'm a sookylala.


The cave was huge and with torches turned off very dark, as caves are.  I was hoping to see some bats but no such luck, just a few birds and bees around the entrance. 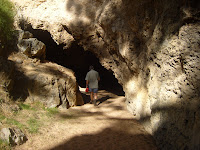 The way in.
There are a lot of feral bee hives hanging from the cliffs above.
. Watch ya head.  There were a couple of bits hanging down that would hav knocked you out had you walked into them. 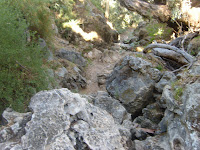 We had to climb down and over this pile of boulders once we were out to get onto the path then a kilometre walk back to the car.


We were the only one here to start  with but there was another car as we were leaving though we didn't see the people from it.   By 10am we were on our way to Green Head. 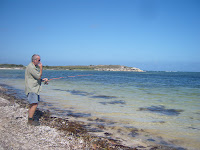 We went fishing for lunch
here at Billygoat Bay. 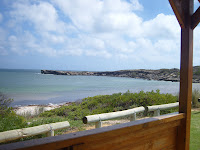 This is the view of Dynamite Bay
where we ate our rolls at lunchtime. 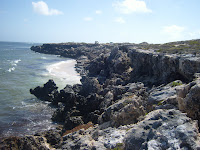 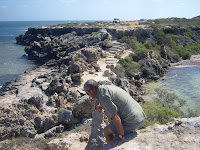 View from Point Louice and climbing back down and over to where the car was parked.

We had a great time, saw heaps and will go back and camp one day.
Might try for a family get together.  I'm sure some of them will be interested.
Posted by Barb. at 11:23 AM