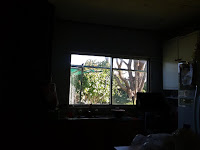 I was away from home most of yesterday and didn't get back until around 3:30/4:00   Did drop in for a bit to pick something up with T and she noticed a bird at the kitchen window, sitting outside and sometimes tapping the glass.  We thought it was cool and that it was probably getting bugs from all the spider webs.    Went out again and when I return home the bird is still there, still tapping the glass with it's beak. 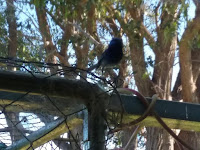 It didn't seem too fussed about me getting close to the window and taking photos either.


After a bit I posted on a bird group and someone mentioned Blue Wrens being territorial and reflections...Of course!  So I went outside and yep, reflections.  He was thinking that there was another bird in his area.
Three hours later and it was still there!

The wire cage that you can see the corner of, that is our cat cage.  The wren was flying in and out of that and sitting on the wire, not smart for a bird to enter a cat cage.
This morning he was back, tapping at the window with his beak.  I knew I had to stop his reflection but wasn't sure how to.  I hung a towel from the inside but that didn't work.  What I needed was something on the outside but that was going to be a bit trickier.   I tried throwing a towel over that rail that the cords are on but there was still too much glass so he still came back.  In the end I knew I had to cover the whole pane of glass, but how? 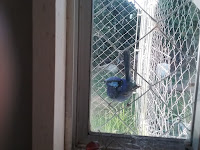 I ended up hanging an old curtain up but I don't know how secure it is.  Not very I think but it is doing it's job.  My first attempt I didn't cover the whole window, missed a spot and he found it. 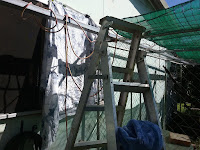 Oh and a heads up.  If you are not as fit and agile as you once were...Put a block of some sort under the ladder leg so it doesn't wobble as much.  Tie your shoe laces up before climbing the ladder.  Don't rely on bendy shade cloth wire to support you.

I will ask husband to make it more secure when he gets home from work.
Posted by Barb. at 9:02 AM