This week while I have the 4 dogs here I thought I'd give this a try, just to be able to say "Yeah, I can do that"
I have plenty of Chokos that need using so that had to be one of the ingredients.  What else is in biscuits...flour, egg?  A quick look online showed just how fancy these things can be but I have never been fancy so my version was just going to have stuff mixed up in a bowl then that would be put in the oven until cooked.
We had some just turning green meat thanks to some that the son had left in the shed fridge and the husband had put this on the stove to boil.  That liquid and meat was the protein part with the Chokos, oats, a couple of eggs, flour added.   Mixed it up, pressed it into a pan and put it in the oven of the woodstove.  I *should* have left it in longer to make it harder like the bought stuff but the dogs liked it and it made me feel all good doggy motherish so it's counted as a success. 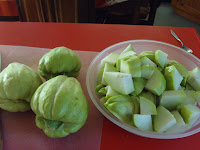 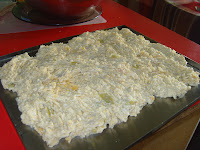 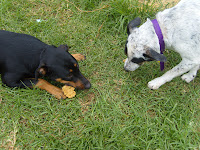 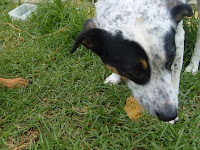 I have also been cooking up Chokos and any manky veg and veg peelings and soaking their everyday dog biscuits in that mix.  It gives the dogs a bit extra and I like using the Chokos this way.  Once again it's all about making me feel like a good dogsitter, going above and beyond and all that stuff...

Have you ever made your own dog or cat biscuits?  I'd be interested in how you did as I'm sure I will try again one day, next time I dogsit.
Posted by Barb. at 7:00 PM