We're still eating from the gardens, didn't buy any vegetables during November.  The photos below were taken a few days ago.

TOMATOES are coming along and there are heaps to pick, every day. I have different plants in different areas but most don't have name tags.   Hundreds  OK, not *hundreds* but  too many, of small cherry type ones that Hubby wanted me to pull up.  He says they are too small for anything but he likes the taste.  Grandaughter eats them off the vine so they are staying.  I plan on cooking them up with onions and freezing a pile that way.  No point in drying them again as nobody here eats them like that.  I only like fresh tomatoes cooked in something.  Not raw, not dried...They are an easy plant to grow though and I am going to try and get them established in the food orchard that we are working on.

The vine below is growing in a tank garden out the back.  The roots of it are 3feet away to the left from where the fruit is as it has climbed up through the Passionfruit vine and the Pelagonias.  Nice fruit and self seeded as most here are.  OK Normal tennis ball size fruit. 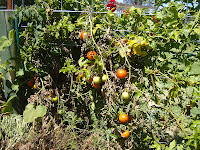 These tomatoes, below, were seedlings I dug up and rescued from the pigpen.  Small,
yellowy when ripe. Very prolific . 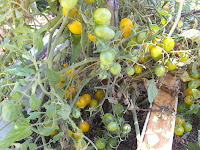 Four plants here in one of the fridge gardens, also unknown but bigger than the above ones. 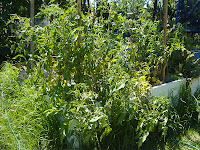 There are more Tomato plants, not yet fruiting in various areas of the yard and I have dozens of seedlings coming up in an empty chookpen.  Some have been staked and will stay there but heaps will need to be to  transplanted to somewhere else and that is on this weeks list.
These ones are, I think, Grosse Lisse.  Hubby likes them because they are big and easy to slice and put on his toast. These are the only ones he wants growing.  I believe we need different types to make sure that there is always something available.  With extra to freeze.  I win! 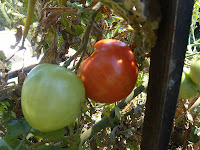 I have 1/2 a dozen Black Russian, seedlings from the son in law that have flowers but no fruit yet.  We haven't tried them before so will need to keep some seeds for next year.  One Mystery Tomato, seedling from daughter.  Need to wait and see what that turns out to be.  One Tigerella?  Tigerello?  That's too shaded though and not doing very well.  Had a dozen of these but the slaters ate them.
There are a few plants out the front, also unknown but they have a decent size fruit on them and start earlier than the ones out the back.  Any plant out the front seems to have very little bug problems, I think because there are less and more diverse.

These are starting to look yellow but are growing differently to the other small type.  I should learn to like tomatoes straight from the bush but I try and try again later and I just don't.  These 2 bushes will be pulled up as soon as this lot is ready to pick. 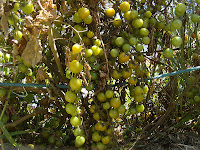 I managed to get a decent lot of carrots.  Then left them outside for a few days...They were still OK to bake but not too nice raw. 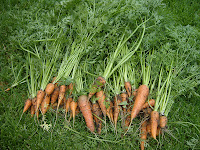 Cucumbers and a few more carrots in here. Cucumbers are doing heaps better than last year so will be able to make up some more Bread and Butter Pickle soon. 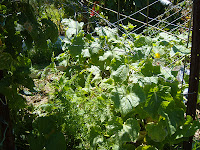 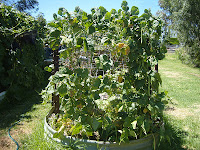 BEANS are producing heaps.  We don't eat many cooked, Hubby doesn't like them and I prefer them raw but I have some in the freezer and need to do more as there are too many to eat them the way I like.  I have left a few to get old so that I have something to plant next year but as I *forgot* to label them I can't remember what sort they are.  Daughter will be able to tell me when she sees the seeds.

They have bugs on them though and I need to go out a few times a day to get them off. The same bug is on the Tomatoes.  I call them Stink Bugs, they probably have a *real* name but I haven't learnt it yet 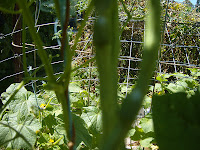 I know, crappy photo but that's how hard it is to see them on the beans too.  They suck the juices out and leave me with not too nice beans and tomatoes so I am out there many times during the day flicking them into a jug of water.  Sorry people, but they have to go and this is the easiest way for me to deal with them.
We are still picking silverbeet and as the daughter gave me heaps of seedlings I now have them in different parts of the yard we so should never run out.
Silly weather has the Choko fruiting.  Yep, we have Chokos again, that will make him happy.  Not really, this is another thing he wants me to pull out.  He doesn't like them and can't see the point to having them.  I like them, he eats them, not always through choice though and they make nice B&B Pickles.  They are staying.  This vine *may* get removed when I have plenty of others around the place. 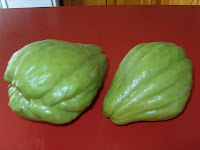 Chokos are supposed to fruit during Autumn so I'm hoping this out of season fruiting isn't a sign of it's demise.

Apricots are falling from the tree so I have to get out there early to get them picked up.  We had a huge issue with fruit fly last year so need to be careful with this.  I love Apricots, another favorite fruit of mine. 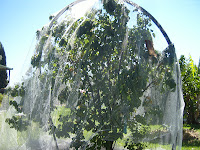 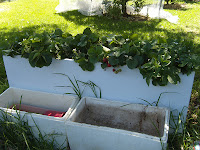 Still getting plenty of Strawberries.  This is one lot growing in a fridge garden, there are other plots spread about the place.

The foam boxes will get Spuds put in them and I plan on doing that next week.

I haven't got enough Lettuce growing, should have put more seeds in months ago but didn't.  Heaps starting to come up now but I will need to think and get more seeds spread around.

Sweet potatoes are still growing but I need to get more normal ones in.  I haven't been too worried about these as I'm not fussed whether I have them or not but in a  zombie uprising survival situation more would be handy.  Same goes for Pumpkin.  Not enough in yet but I do have fruit on the giant pumpkin that I am challenging myself to grow.  More on that soon.


Lots more out there happening and I will update again in the next week or so.  Need to go debug the beans now.
Posted by Barb. at 6:25 AM